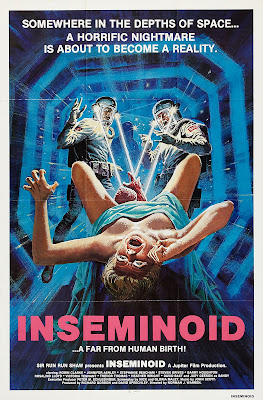 I have come to the realization that British horror/cult director Norman J. Warren is a fucking madman. He is responsible for guilty pleasures of mine such as Bloody New Year and Satans Slave. So far everything I have seen from this guy has some basic commonalities. First being that the movies are dumb and if you try to make sense of them you are fucking doomed. Second being that the acting is atrocious and as unbelievable as can be. The third and final link is a positive one. His movies always seem to be done in bad taste and are usually pretty damn gory. For this reason his movies have some what of a replay value for me and sort of linger around in my mind for a while. 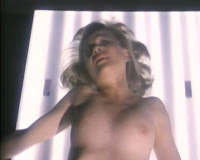 Check out that poster above. It just lets you know right away that this thing is going to be pretty sleazy. Even my dvd cover shows a baby monster that resembles a sort of mutant penis similar to something you would see in a Troma movie or Frank Henenlotter's Brain Damage or something.

Inseminoid which also goes under the title of Horror Planet is sort of Friday The 13th meets Alien. It rips from Alien as much as possible but the overall sleazy story makes this thing run a bit more like a slasher film. It tells of a woman (who looks a whole lot like Dee Wallace) who is raped by an giant slimy alien and impregnated with the monsters babies. The rape scene is bound to make you feel a bit uneasy and the thought of these mutants incubating in this woman isn't so pleasant either.

People are knocked off one by one in true slasher fashion. Most of them are mangled pretty badly. Some of them are even hung up on doors and one can't help but wonder if Jason Vorhees is decorating the place.

A woman saws her foot off, another is chopped into with a pair of scissors, guts are ripped out, legs are blown apart in explosions and we even get a bit of cannibalism. The little aliens also like to feast on human blood and we just have tons of red stuff to keep us awake while the world dumbest characters set themselves up for the next cheesy murder scene. Once just about everybody in the whole movie is dead and we already surpassed what would have been a perfect conclusion the film decides to go on for an extra few minutes which I couldn't understand for the life of me.

If you're looking for something British that will most likely burn out your last few brain cells while still delivering the goods, this might be the one for you. Fans of this movie should be sure to check out some of the other weird films from the director as well. 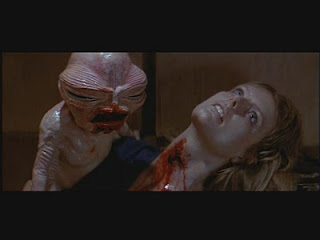