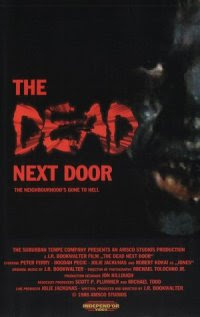 People really love to shit on this low budget zombie flick. I myself wasn't the biggest fan when I first saw it years back but I must admit this 8mm gore flick has grown on me. 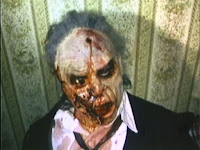 Sure its silly, horribly acted, horribly dubbed and just looks generally cheap but I believe these are the films strong points. I love the gritty look of the 8mm film and the gore is pretty fun too. If only we had some what of an interesting story I would be able to give The Dead Next Door much more praise.

A militant group cheesily named "The Zombie Squad" take to the road for a scientific research team. They collect zombies and bring them back for testing in hope of a cure. Of course our Zombie Squad spends more time killing the undead bastards off then collecting them but that is besides the point. They also threw in a pretty dumb and pointless subplot about a bunch of religious weirdos who think the zombies are a gift from god and that rapture is here. 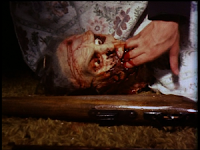 I say it is dumb but that is what would probably happen in a real zombie apocalypse situation. Religious maniacs would probably be roaming the streets with the walking dead, looking to sacrifice normal thinking folk to the zombie-gods or something.

Anyway, this thing is loaded with cool gore gags. Heads are blown off (complete with red splatter), fingers are bitten off, achy-breaky skulls are dissected (complete with leaking brains), necks are bitten, machete's are pushed through torso's. We have a grenade shoved into a mouth and a big bloody explosion. Its pretty obvious that the film makers were die-hard horror fanatics. The film pays homage to Evil Dead and Sam Raimi, George A. Romero, Steven King, Tom Savini and others.

Dead Next Door gets to much flack from those who need polished horror movies. Its a million times better then the shit that comes out today and its a fun watch. Wear a raincoat because the blood rains in buckets in this one.