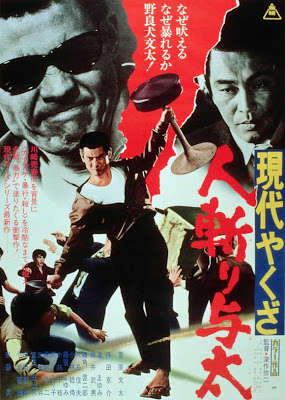 Directed by the same man who would later do Battle Royale and its sequel. This 70's flick tells of a natural born loser. In fact he was born on the day that America dropped the bomb and Japan lost the war. From birth he was condemned a loser. A no good "punk" and that's what he chooses to be.

Our anti-hero is arrested and jailed when convicted for a brutal attack on rival Yakuza gang members. He traps them in a Japanese bath house and goes to town on the naked men with a sharp knife. He cuts them up real good and leaves a bloody mess for the police to find. He also had his hands in drugs, theft and a prostitution racket. In other words the streets of Tokyo are probably a whole lot safer with this man locked in prison.

Once his time is served, our main character decides to get right back into the chaotic mess of gang life. His first stop as a free man is back down to the bath-house where he sliced up his enemies. He enjoys the company of a sexy Asian babe but doesn't manage to get his rocks off before getting into a ass-naked fist fight with some fellow degenerates. Next he forms a small street gang. Together they aimlessly roam the streets and destroy local shops and pick fights with other small time gangs. The message is... Hey we are taking over this town. Stay out of our way or we will smash you up. The only problem is they bite off more then they can chew with a dangerous well established Yakuza clan. They join forces with another Yakuza gang but it is only a matter of time before our self destructive main character insults every major boss from every gang in the city. It is obvious that this man has a death wish and things will be coming to a violent end.

Luckily for us we don't have to wait till the end for violence. This movie is a non stop street fight from beginning to end. Loaded to the brim with stabbings, brutal rape scenes and broken bottle-fu. We also have some incredibly good looking women in this movie. The Street Mobster falls for a girl that he raped and sold off to a whore house in his younger years. We have our share of nudity for added kicks but there is also a compelling story of a hopeless love that runs through the film as a sort of subtext. These two nihilistic characters bond together on the thinnest line between love and hate and their performances make for some pretty emotional scenes.

Street Mobsters offers up frantic camera work that seems to be ahead of its time. Its less obnoxious then the fast cutting movies of today but the formula is similar. With this movie the camera work makes sense. It adds to the chaos of the street violence and reminds me of the race war scene in Romper Stomper that takes place in the streets. Street Mobster also offers up a scene where a mans fingers are chopped off and some nasty gun-violence.

By the time the credits role this one gets a bit repetitive but it still makes for an awesome 70's crime film from Japan. 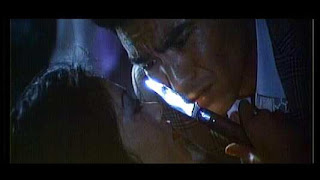