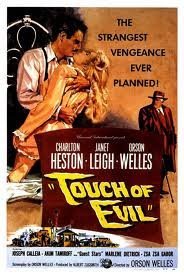 You can only sit through so much trash until you go back to Orson Welles. Touch Of Evil is cinematic brilliance from opening title to end credits. The establishing shot is one of the most elaborate I have ever seen. Some might call it pretentious but I call it eye-candy.

Charlton Heston plays a Mexican cop (and pulls it off) and Orson Welles plays an American cop with some social issues. When a bomb goes off on the border of Mexico and the U.S. Heston and Welles bump heads in their different tactics to track down the killer.

Janet Leigh plays Heston's wife and she gets caught up in a personal vendetta against her husband. The twists and turns are as innovated as the movement of the camera work its self.

Touch Of Evil runs a bit on the long side but never really gets boring or tired due to the masterful craftsmanship that went into this production. Welles is undoubtedly a genius and it is to bad that America will probably never know another writer, director, producer and actor quite like him.

Where are the Welles and the Hitchcock's of today? Most certainly not working in Hollywood, that's for sure.

There are some real heart pounding moments in this Noir flick. We have murder, juvenile delinquents, a good cop, a bad cop, drug use, excessive drinking, top of the line acting and a great story to go with the amazing cinematography. Fans of Citizen Kane should check this one out. Its bound to keep you at the edge of your seat. 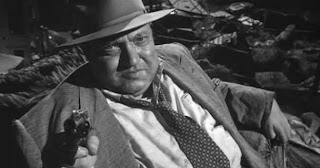