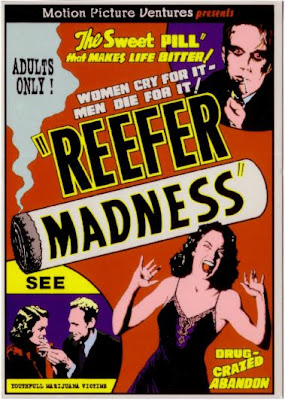 This cult classic is amongst the most important of all teen-scare, drugsploitation flick. Its also been released as Tell Your Children in 1938 and Dope Addict, Doped Youth, Love Madness and The Burning Question. 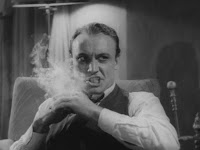 Reefer Madness shows marijuana as you have never seen it before. An evil, evil drug! and I don't mean evil in the sense of a bunch of long haired smelly hippies talking about peace and love... I'm talking about crazed gun slinging mobsters who are quick to turn the youth onto "the devils weed".

According to Reefer Madness, marijuana isn't the mellow drug that you thought it was. Belly-laughs turn to madness and anything can happen from violent beatings with a cane to murder. The most memorable scene shows a man excessively smoking grass while a woman plays the piano. "Bring me some reefers". "Play it faster! Faster! Play it faster!"

I was lucky enough to catch this thing in the theater in a strange colorized version. Not that the color made the film any better it was just something different. The main thing that I found interesting about the colorized version was that the clouds of smoke was all different crazy colors. Each person exhaled a different color smoke. We had reds, blues, yellows, purples etc.

Anybody who is into teen-scare movies or exploitation films in general is usually familiar with this one. Its by no means a great example of good film making. Its loaded with bad acting, bad editing and very strange camera perspectives. We have a horrible special effect in a court house with a swinging noose and very silly dialogue. In other words its a bad example of film making but a good example in exploitation and bad taste.

Reefer Madness comes complete with a car crash, the obvious gratuitous marijuana smoking, death by hand gun, a suicide (complete with leap through a window), excessive laughing, violent cane-fu, crazy haircuts, and lots of youngster making out in a stoned stupor.