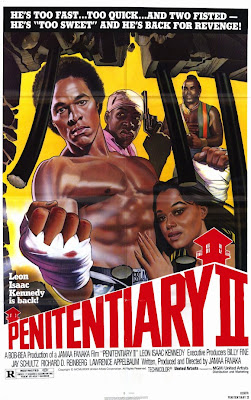 Fans of the first movie should be prepared to be let down. Penitentiary 2 really just doesn't hold up to the original. Too Sweet is on parole and doing the best he can at a dead end job to keep out of trouble and stay far away from the big house. The last thing he wants is to end up in the same hell hole that he fought for his life in Penitentiary but sure enough Too Sweet gets the short end of the stick yet again and is convinced to go back to boxing.

This time with Mr. T in his corner Too Sweet is forced to fight one of his old prison enemies. This time around the enemy is played by a completely different actor. Ernie Hudson from Ghostbusters puts on a clown wig and kills Too Sweet's girlfriend. Its pretty obvious what goes on from here. We get some vengeance and some boxing but the general story is weak in comparison to the first film as is the fight scenes.

On a more positive note we get a crazy little midget who brings some entertainment to the screen and Hi-Fi the drag queen shows up again for some more cross dressing madness. I am yet to see the third film in the Peniteentiary series but I hear that its not much better then this waste of time. Stick with the first film for some bad-ass boxing, psycho jail-birds and some slick dialogue. 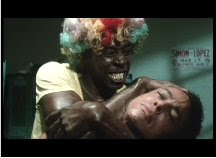