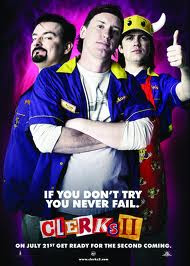 Its not to often that I watch a comedy. Or at least what was supposed to be a comedy but the Clerks movies are a bit different. They are fan-boy movies. Movies for argumentative assholes like myself. Not to mention that I have been mistaken for and compared to the character of Randal for rears now. I suppose we do have some similarities with the exception of his love for Star Wars.

Personally I couldn't give a shit about Jay & Silent Bob. I know people like them in real life and I fucking despise them. They remind me of all those I.C.P cunts who walk around with big baggy UFO pants and smoke a lot of weed. The character of Dante is a cry baby, pussy but when you throw Randal into the mix it makes for high entertainment filled with witty dialogue and lots of filthy language.

There are quite a few differences between Clerks 2 and the first film. For starters this time around the movie was shot in color. We also have a much obvious bigger budget and in my humble opinion the second film isn't quite as good as the first but it does make for a fun watch with new chaotic antics and plenty of silly arguments that get stuck in your warped mind leaving you ready to quote it for weeks after the first viewing.

I think they made a wise decision when they casted Rosario Dawson (Kids, Descent) for a bit of sex appeal... Something that the first film lacked. Unfortunately she doesn't offer up any bare breasted boobage but she is still nice to look at, even if she is dancing to The Jackson 5.

This one starts off with the old video-mart burning to the ground. Leaving our two beloved Clerks unemployed and forced to work at a greasy burger, fast food joint. Dawson plays their manager and she has a secret affair with Dante. The only problem is that Dante is due to be married any day. Randal makes things a little more humorous by doing Dante the favor of ordering him a live donkey show from Mexico. For those of you who grew up under a rock and don't know what a donkey show is... It's when a woman performs oral sex on a donkey. So get ready for some mouth watering donkey-dongs. We also have plenty of christian mockery going on in here so all you religious weirdos might want to stay away from this one. Besides a free donkey show is way to much of a turn on for those people. Throw in some young altar boys and this thing might be considered a porno for god fearing morons.

Clerks also offers up a touch of racism for added fun. Every racial slur you can think of is used but porch-monkey is Randal's favorite. "Porch-Monkey for life". Clerks 2 has a happy ending... Aside from the donkey show. Its a love story and a comedy (Yuck). In other words its a great movie for the demented to watch with their best girl. So check it out you p.c. bastards! 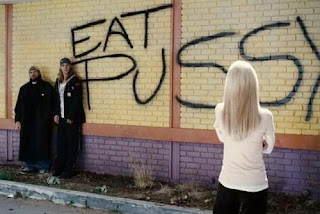 Email ThisBlogThis!Share to TwitterShare to FacebookShare to Pinterest
Labels: Clerks 2