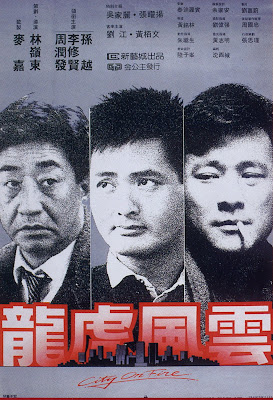 Yes I admit, I am one of the many who felt it necessary to check this movie out after it became known that Quentin Tarantino riped it off when he did Reservoir Dogs. I also admit to being a fan of Tarantino and don't waste my time calling him a hack. I am aware that he rips every movie off in order to create something entertaining for us cinema fanatics. Lady Snow Blood and even The Blood Spattered Bride were not safe from Kill Bill. This still doesn't make Tarantino's movies any less entertaining for me.

City On Fire tells the oh so familiar story of an undercover cop who meets with some burglars for a jewelry heist. Instead of Tim Roth, Chow Yun-Fat plays our sneaky piggy. He takes a bullet during the heist and dies in the final showdown. The famous "Who killed Nice Guy Eddie" scene was lifted directly from City On Fire and in my humble opinion City On Fire ends on even more of a downer note and that is because there is more going on in the Chinese film. I wouldn't go as far as to say there is more character development because Tarantino really knows how to write interesting characters with witty dialogue but City On Fire has much more back story.

Chow Yun-Fat's character is ready to be married and loses his girl due to the fact that he is always working on top secret and dangerous police cases. All he wants is out of the police force but they will not except his resignation until this final mission is completed. This makes it all the more shocking when he dies in the end of the film.

Is it better then Reservoir Dogs? I can't really say. It was definitely first. I like both movies for different reasons. I will say I think it takes a lot of talent to form a story like Reservoir Dogs from this movie. Every Tarantino fan should check this movie out for themselves and perhaps the world will stop viewing the man as a genius and take him for what he is. A man who makes over budgeted exploitation flicks with roots that date back to when he was just a school-boy movie-geek.