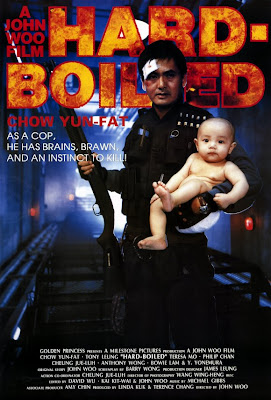 I have never cared for typical action movies, filled with explosions and rapid gun fire. I find them to be annoying and repetitive. Sure, one could argue that horror movies, slasher films and zombie flicks are just as repetitive and cliche and they would be right but horror films never let me down. My life long obsession with horror genre films have kept me satisfied this far while action films went out of style for me at around 13 years of age. I usually can find exceptions within foreign land. For instance Spaghetti Westerns are always better then American westerns. Yakuza films are usually more violent and artistic then American mobster movies. There for I figured I couldn't go wrong with this cult favorite from John Woo.

Well I didn't find this movie to be any better then the average shitty shoot-em-up flick from the U.S.A. Sure the violence was just a bit more excessive and the stunts were a bit more exciting but what it all boils down to is Hard Boiled is just another fucking bore like Lethal Weapon or Die Hard.

Chow Yun-Fat (City On Fire) yet again plays an undercover cop who is trying to stop a major gun trade operation. We have lots of crazy gun-fu and shit loads of explosions. Oh and Yun-Fat also saves some babies from a giant baby barbecue.

Apparently John Woo originally wanted to do a story about a infant serial killer. A psychopath who poisons babies. Of course he bitched out and what we were left with was Hard Boiled. How a script about a baby killer turned into this... I'm not sure but I am also not pleased.

I hate Woo's American movies like Face/Off and so far I'm not a fan of this shit either. I will give him one last chance with The Killer and if that is half as bad as Hard Boiled I can live happily without his obnoxious brand of action. Boring! 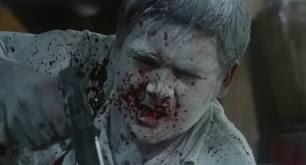