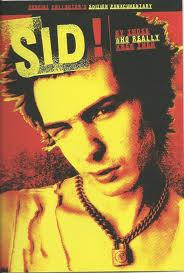 I have no idea how many movies and documentaries I have seen on Sid Vicious and The Sex Pistols. The classics like The Great Rock N' Roll Swindle and Sid And Nancy are just scratching the surface of the seemingly countless documentaries on the infamous British punk group.

As it says on the DVD cover this one is filled with interviews from people who actually knew Sid Vicious very well. Girls that he used to run around with, friends and ex band members. With that said you would think that there is no way that this one could fail. The truth is that this is probably my least favorite documentary on the nihilistic punk rocker. Movies like The Filth And The Fury far surpass this flick in every way imaginable.

We do get some cool stories about the early years of Sidney but the majority of the film is about fashion. How great Sid looked. How original he looked. How everybody wanted to look like Sid. How he was destined to be a star. Blah blah blah. Anybody and everybody who is into punk rock is aware that Sid Vicious made a great poster-boy and his striking image alone is enough for any young punk rocker to grasp onto and sort of instantly identify with it. His angry snarl, his ripped up clothes, his messy hair all screamed out to the nihilistic youth of a certain generation but to base a 90 min. film around what a kid wore is pretty fucking lame.

The movie also spends a lot of time trying to bring the man out of the myth which is pretty hard to do considering he lived such a short and reckless life. His friends talk a lot about how nice he really was. How shy and insecure he was and how occasionally he would get himself into some trouble. An ex girlfriend in particular holds the best interviews, with stories about how Sidney would wet the bed every night and when they would wake up covered in his piss he would laugh and make jokes about it because it "Smelled like pure brown ale which is what he drank all day". She also talks about how he would just burp and fart constantly in public and giggle about his own vile bodily noises.

Members of The Damned speak of some of his more violent moments. Apparently Sid Vicious blinded a girl at a Damned show when he tossed an empty pint glass at The Damned while they were on stage. He missed and the broken glass punctured a young girls eye whom became blinded permanently. Naturally I preferred all of these stories more then how afraid he was of women.

The documentary comes complete with a bunch of stills of the punk legend and the oh so familiar interviews. However it sported one rare interview with a young Sid Vicious that I don't think I have ever seen before. Sid speaks about being a Skinhead in his younger years which I found to be pretty typical but also very interesting at the same time.

Over all its a very weak and uninformative documentary. Most of his friends believe him to be innocent of Nancy's murder and claim his suicide to be a complete accident. One thing that really bothered me is that they seemed to have completely forgotten to mention his fucking suicide note. How the hell does a documentary that is questioning a mans suicide not even mention his death note? What the fuck! "I'll be dead before I'm 21".

Email ThisBlogThis!Share to TwitterShare to FacebookShare to Pinterest
Labels: Documentary, Sid : By Those Who Really Knew Him