Santo And The Diabolical Brain (1963) 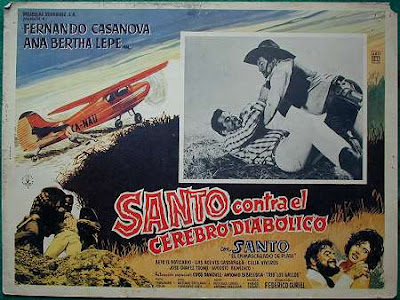 Here is another ridiculous early attempt at a Lucha Libre film. In this Mexican wrestling romp two detectives disguise themselves as cowboys and take off to a dangerous village that is run by criminals in search of Virginia. Virginia left her boy friend (one of the detectives) and is shacking up with the leader of a violent gang. 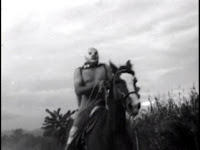 Where does Santo fit into this you might ask... Well nothing really quite fits in with this movie. Things seem to happen for no apparent reason and overly it doesn't make much sense. Santo however does appear before long. He is yet again working with the police and when the detectives blow their cover Santo comes to the rescue. The first time he appears is great and has to be seen to be believed. The villagers see Santo standing at the top of the stairs in his spandex, cape and signature silver mask and all at once yell out "SANTO". Our wrestling super hero does some fast driving in the expected car chase scenes but for an added bonus we get to see Santo ride a horse. Santo beats the shit out of anybody who gets in his path and it makes for a pretty entertaining flick. He also stops a airplane from taking off with the use of his muscles only. This is quite the spectacle and bound to get a chuckle from anyone who can appreciate these cheesy little action flicks.

You should be warned that there is absolutely no Diabolical Brain in this movie and it shouldn't be confused for one of the Santo horror flicks like Santo Vs. The Zombies or Santo And Blue Demon Vs. Doctor Frankenstein. Instead we have typical western villain with some huge bulging eye balls. However we do have a torture scene in which our two detectives have their heads crushed with rope and sticks? However my favorite moments shows one of our detectives pretending to fight as he watches giant brawls go on around him. We also have some kinky spankings at the end of the film. Despite the lack of a Diabolical Brain this one is slightly more entertaining then most of the early Santo flicks. Fans wont be disappointed. 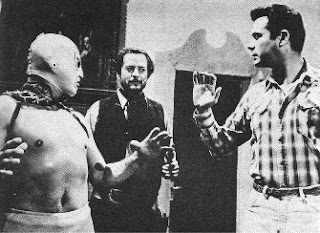