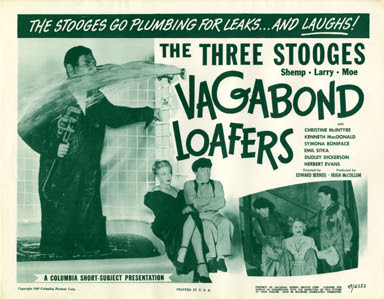 This Edward Bernds remake of Del Lords 1940 Three Stooges romp A Plumbing We Will Go holds up well to the crazy escapades that Curly offered up nine years earlier. I prefer the 1940 flick a touch more but they are both very good and jam packed with goofs and laughs. 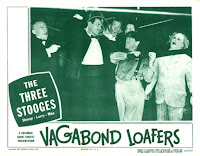 The Stooges get their hands wet as plumbers. Their company name is Day And Nite Plumbers and they got their first call to mansion where the upper class scum is holding a party. Amongst the yuppies are two criminals on a mission to steal a priceless painting.

On the Stooges arrival they are of course talked down upon. By now we all know that every Three Stooges short is a class-war disguised as a comedy. The Stooges get back at the rich bastards by destroying their home and hitting the butlers over the head with heavy pipes. They flood the kitchen, bathroom, basement and hallways. Watter pours from the television and light fixtures in buckets.

Shemp's take on the maze of pipes in the famous bathtub scene is almost as good as Curly's. Larry goes a bit nuts with a blowtorch and sets Moe's ass on fire. Larry also roams around in covered from head to toe in white powder and the guests run from him. Moe "How much do you charge to haunt a house" Larry "Depends... How many rooms".

The Stooges save the day this time and catch the bandits. Of course they get no reward and they leave the mansion flooded with water.

One of the best of all Three Stooges remakes! 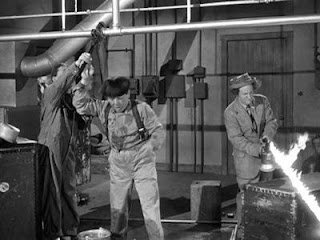