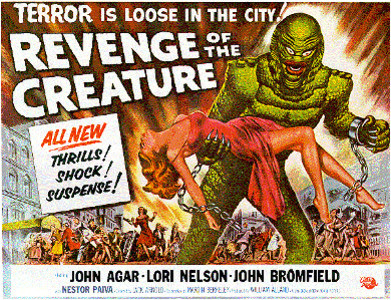 This 1955 follow up to the far superior Creature From The Black Lagoon takes the creature out of the amazon and into civilization. When the creature was killed and left floating in the water that was all a joke... The creature was only comatose and the scientist brought him home where they will place him in a tank as an attraction for all the world to come see "The Gill Man" on display.

John Agar who would fight everything from Tarantula to The Mole People and the shittiest monster of all time in Night Fright, plays the hero who has to protect the new bikini-clad bimbette. We get similar under water shots of our new blond sex appeal taunting the creature with her shapely body but it doesn't come off as affective as the original with Julie Adams.

The mission is to study the creature and eventually civilize him. Of course the best way to go about this is to electrocute him and give him various beatings. Its not long before the creature breaks free and kills some of the staff that has been tormenting him. The creature flips over a car and sends tourists running scared and eventually makes his way to the ocean.

But instead of going home the creature continues his pervy ways and tracks down his new swimming beauty. He is overly sneaky in this one and stays true to his voyeuristic ways and watches her change from her window. Then he kills her "boyfriend" who happens to be a German Sheppard named Chris. He even shows up to a rockin diner party and gives the people a good scare. The creature eventually gets his scaly hands on his girl and takes her along the river banks, leaving a trail of dead bodies. John Agar comes to the rescue with the help of the police force and shoots the creature dead. Jack Arnold uses the same exact death scene from the first film but this time we won't be fooled. We know he will be back for Creature Walk Among Us, where he walk in the sun and breathe like a man.

Revenge Of The Creature doesn't hold the originality of the first film but is still a fun watch for 50's monster movie fans. It has a level of camp that can keep the audience chuckling even through the slow talky scenes. The 3-D doesn't work as well in the sequel either but the film still manages to hold a certain social commentary on the evils of man towards nature. Check it out for skimpy 50's bathing suites, John Agar-Fu, A Gill-Man, and Clint Eastwood's first appearance of all time. 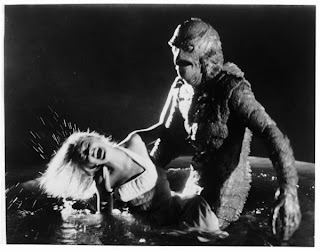 Email ThisBlogThis!Share to TwitterShare to FacebookShare to Pinterest
Labels: Monster Movies, Revenge Of The Creature