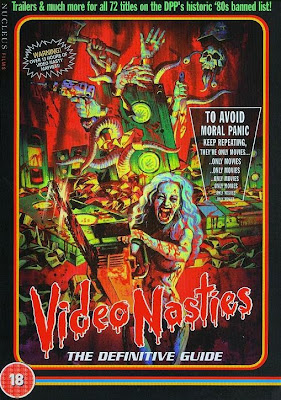 Pretty great documentary here on the Video Nasties, UK ban list. However the DVD is even better then the actual movie. The Sevrin 3 disc set comes complete with of course the 73 minute documentary but then two extra discs of trailers for every movie on the Video Nasties list. Not only do we get the trailer but a short spoken review on each of the films. Needless to say it takes quite a long time to get through all of the material on this set.

Video Nasties : The Definitive Guide is hosted by a British hottie named Emily Booth who has a couple of credits to her name, none of which I ever really want to see. Pretty much all of it looks like modern digitalized shit. Anyway aside from the sexy brunette Emily Booth we have lots of informative British folk shedding lite on what it was like to be an unfortunate victim of the UK censors. The documentary sports interviews with the fascist scum who helped ban the nasty horror gems as well as the genre fans who defend the films. Shit-Bag Mary Whitehouse and her moronic Christian drones appear in old stock footage shedding their bullshit views on the video tapes. Its pretty funny to watch these human rectum's speak now-a-days. They just look like fools.

There really isn't anything that this movie leaves out. They take a subject that isn't all that vast in the first place and cover just about ever square inch of it. For this reason I find it strange that they made a sequel to this movie. I can't fathom what they possibly left out of the first film. Either way I will eventually get around to watching the sequel, if for nothing else, the trailers! Personally having a life long obsession with trashy trailers I put this 3 disc set in the ranks of trailer compilations like Mad Rons Prevues From Hell  and Grindhouse Horrors this thing sports close to 80 trailers. Woo-Fucking-Hoo!

I would recommend the Definitive Guide to anyone who is interested in collecting the Video Nasties tapes or just interested in the subject and more so anyone who really digs horror and exploitation trailers. There are so many good ones on here. There were even a few British trailers that I have never seen before including one or two rare English television spots. Check this one out and lose your moral fiber for good. That is of course if you horror-loving, sickos have an morality left to lose. To avoid fainting. Keep repeating, It's only a movie... Only a movie... 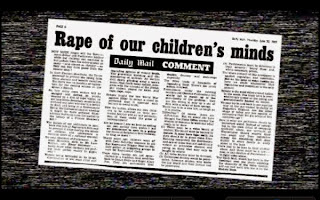