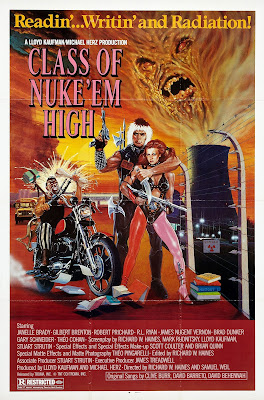 Remember when Troma Studios was still cool. Aside from The Toxic Avenger, this one is probably Troma's second biggest hit. Clearly influenced by the cult classic, Class Of 1984 which would come out four years earlier then Nuke 'Em High. This is one of the best from the Troma team.

Directed by Troma president Lloyd Kaufman (Terror Firmer) and Richard Haines who's directorial debut was Splatter University, Class Of Nuke 'Em High is a strange concoction of genre films that fills the screen with fast paced anarchy, adrenaline and pure entertainment. Nuke 'Em High manages to mix the classic Juvenile Delinquent films with monster movies. While the film never takes itself serious. Nuke 'Em comes off somewhere between a spoof / comedy type movie and a geek-boy homage to many films before it. Yet it still has enough originality and style to stand alone as a highly entertaining movie with tons of replay value.

Here's the stupid plot. Tromaville High School is located next to a nuclear power plant run by Troma fatty Pat Ryan who most would remember best as the fat corrupt mayor in The Toxic Avenger who gets disemboweled. Yet again Pat Ryan plays the bad guy and he doesn't care to much that Tromaville High is becoming a radioactive nightmare. "I don't give a wet fart" He says when he learns that the radiation levels are becoming dangerous. Its not long before the honor society at the school become a violent gang of drug pushing maniacs. They call themselves The Cretins. This group of wild punks are so over the top, they make the cast of Grotesque look serious. Its not long before The Cretins start selling radioactive marijuana to the clean-cut students and things start to get really strange. The atomic weed is causing the students to mutate and in one of the most memorable scenes a teenagers erection grows to be about eight feet tall and he also grows giant latex breasts. His girfriend becomes pregnant and vomits up a little monster similar to chest bursting creature in Alien. She flushes the monstrous fetus down the toilet, where it will end up in a vat of toxic waste and grow to become a menacing slimy killing machine.

Its not long before the whole gang of Cretins get expelled from school and they plot what might be the worlds first school shooting. The punks walk into the radioactive school and blow away the teachers with assault rifles. They drive motorcycles thru the school halls, spray paint the walls and destroy the whole building. It all comes to a conclusion when The Cretins meet the giant green monster in a battle to the death. Class Of Nuke 'Em High comes complete with decapitation, extreme genital stomping, mutilated faces, giant monsters, small monsters, radioactive human melt-downs and one of my favorite party scenes in any movie.

If you like movies where high school punks take over the school (Over The Edge) and run amok or you dig giant monster movies, then this one is perfect. Its got the typical Troma tongue in cheek social comentary, comedy, action, sex and violence. Its fun!