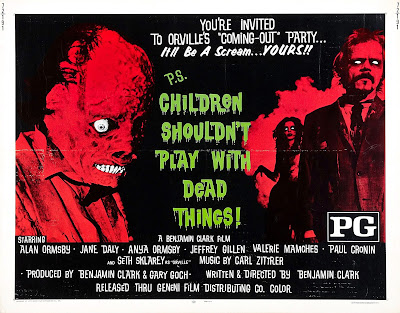 I first watched this thing back in the VHS days. I must have been about 15 years old. The gory VHS box screamed take me home. It depicted a fat hippie in striped pants being mauled by a decrepit zombie. Needless to say in my teenage years I was totally disappointed. Not even sure if I made it all the way thru the film. All these years later I had another chance to see this thing. Children Shouldn't Play With Dead Things was playing a weekend long zombie-fest at a drive-in somewhere in bumble-fuck America. This time around I saw the movie thru slightly different eyes. Perhaps it was just the fact that I was living out a life long fantasy of mine and seeing this thing in a old time drive-in amongst other weirdos but this time I almost enjoyed it. Almost!

The story involves a group of hippie types who take a boat to a creepy cemetery on a foggy island with the plans of raising the dead by prayer to Satan. These losers ought to be lined up and shot for multiple reasons. First off they are not children. They are adults. Why the hell would a bunch of young adults believe in magic and devils and stuff like that. Number two, they are the worst dressed group of morons I have ever seen in my life. Last but not least these ass-hats deserve a bullet for their annoying and seemingly endless dialogue. The whole first half of the movie we have to listen to these dip-shits go at each other with ancient witty humor. To say the least, I absolutely hate these dicks and wish painful, violent death on each character. Luckily for me, that is exactly what I got. 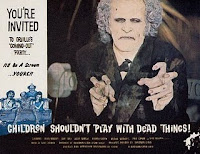 So these dorks pray to the prince of darkness and try to bring a rotten corpse back to life. The corpse goes by the name of Orville and turns out to probably be the best character in the movie. Perhaps it is because Orville doesn't speak. Anyway Orville can be seen in all his glory in the poster on the left of this script. Orville is dragged into a old cabin and thrown about as if he were a toy. Hence the title, Children Shouldn't Play With Dead Things. These hippie kids have no respect for the dead so why should the dead respect them. Eventually Orville springs to life as a flesh eating zombie but so does the rest of the cemetery. The walking dead rip into our classless shit-head hippies one by one and devour their flesh and blood. The films strongest point is how good these walking corpses look. They look as good as the undead in Lucio Fulci's Zombi. Its almost to bad these zombies didn't get a chance to be in a better movie. What hurts the film is the seemingly endless talk that goes on between the hippies. Another problem is that there really isn't enough gore in the movie. While the zombies look fantastic there is very little of the red stuff. A bit of blood & guts goes a long way. There is also no nudity and not really any profanity. Children Shouldn't Play With Dead Things received a PG rating which does seem a bit strange but I can understand why.

When its all said and done CSPWDT is one of the most bizarre PG, zombie, comedies of all time and for that it does deserve a look. Plus it is a pleasure to watch these people die. Now that is something that everyone can sink their teeth into! 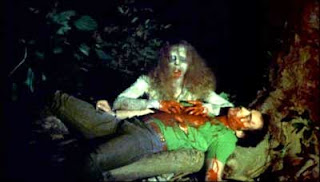