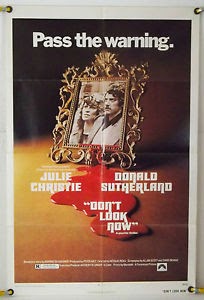 This British, Italian co-production is mainly shot on the canals of Venice. An ideal setting for a thriller mystery. At times the canals appear to be very peaceful and others they are dark and creepy. In Some scenes they are spacious and others they are claustrophobic. In Don't Look Now the locations act as a character themselves and this just might be the films strongest point.

This one follows a married couple (Donald Sutherland and Julie Christie) who tragically lost their daughter. The little girl drown in a murky lake while playing in the yard. The unexplained death left the married couple emotionally distraught and now they fight to pick up the pieces of their lives. Donald Sutherland plays John Baxter who's profession is in the restoration of art in ancient churches. Business has taken Mr, and Mrs. Baxter to Venice where they meet two elderly sisters, one of which is a blind psychic. Eventually the creepy, old, blind, hag convinces Mrs. Baxter that her dead daughter is trying to communicate with her and her husband. She also claims the dead girl delivers a warning, that "as long as they stay in Venice her husbands life is at risk".

Being a man of logic (no he is not religious) John Baxter doesn't buy into the bullshit that the old bags are laying on his wife. This all starts to change when he almost meets his fate in a church. John starts to have premonitions which do not become clear until the films final moments. Throw a deranged serial killer into the mix who in running around Venice, killing off young women and leaving the corpses in the canal and the viewer is never quite sure which way the film is going to turn. Is it in fact a supernatural movie with a ghostly little girl? Is it all in the minds of the distraught parents? Or does the killer have a bigger a part in all of this? I wont be a total bastard and give the twist ending away but I will point out the films high points.

This one offers up a steamy love scene between Sutherland and Christie which is almost to romantic for my taste but its also kinda weird and artsy which makes it interesting to look at. Julie Christie bares it all for the camera in this one and so does Sutherland. Now I know Donald Sutherland has never been shy and has quite a few nude scenes in his filmography but I can't help but wonder if the guy is a bit of an exhibitionist. Perhaps he requests to do nude scenes like Harvey Keitel. Just a thought... Anyway being the childish moron that I am I can't help but chuckle at the bare-ass Donald Sutherland scenes. We also have a creepy dwarf thrown into the mix and of course the blind psychic who wears those creepy, foggy contact lenses which always remind me of The Beyond. There is also a really cool scene where the killer is revealed and a kitchen knife is pushed through a unsuspecting victims neck. This scene is quite gory and unexpected from a film which is done more on the classy side.

While I personally prefer my horror to be a bit more on the raunchy side I suppose Don't Look Now was done pretty well for what it is. This one is more of a psychological thriller but does have some great moments. Not the best thriller I have ever seen but certainly not the worst.