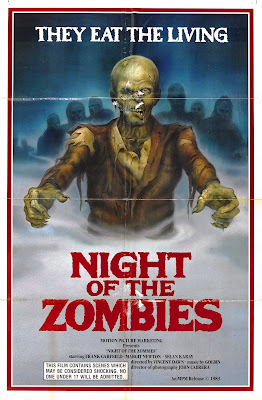 If Bruno Mattei is known for any one thing, it is probably for being the biggest thief in cinema other then Quentin Tarantino. Never is this so blatant then in Hell Of The Living Dead. Bruno Mattei out right steals scenes, music and dialogue from George A. Romero's Dawn Of The Dead but ya know what? We love it!

Originally titled Virus and then Hell Of The Living Dead and Night Of The Zombies, not to be mistaken for the Joel M. Reed movie of the same title. Right from the films opening this thing screams Dawn Of The Dead but it was obvious that Mattei had alternate scripts. Hell Of The Living Dead jumps around like fleas on a rat and speaking of rats we do have a zombie-rat scene in which a scientist is gnawed to death by the killer rodent. Of course only four years later Mattei would release his most famous movie Rats : Night Of Terror. Anyway this zombie flick really is all over the place. We go from inner city viral outbreak to the jungle and back to the city and into rural suburbs and back to the amazon. It just seems very confused but some how it all works out. The jungle scenes seem more like a Italian cannibal film and blatantly rips off moments from Ruggero Deodato's Cannibal Holocaust.

Despite the fact that Hell Of The Living Dead is basically cinema plagiarism, it manages to stay so damn entertaining. Maybe Bruno Mattei really knew what he was doing. Just take all the best elements from movies that are big hits. When Hell Of The Living Dead comes up in conversation usually somebody always says "oh yeah, thats the movie with the music from Dawn Of The Dead". Mattei shamelessly directly lifts Goblin's musical score for Dawn and why did he do this? Because he liked the music of course! It really is that simple with Mattei and while some may hate him for that and call him a hack, I rather enjoy his films and know I'm in for a cluster-fuck of ripoff entertainment when I go into one.

While there is not any one thing that makes this movie so good, I do believe that the over the top violence, bad dialogue and sometimes nonsensical weird scenes really give this movie plenty of replay value. In one of the strangest moments a cat claws its way out of a dead womans stomach. Now I don't try to over analyze silly zombie flicks or anything but exactly how does a large cat get inside a dead womans stomach? There is just no logical answer for that but Bruno Mattei has no problem leaving it in his movie. Hell Of The Living Dead also sports what might be the most gratuitous nudity ever. It is almost comical when our lead actress first bares her boobs for us. Oh then there is the oddly reminiscent scene from Lucio Fulci's zombie film of the same year Gates Of Hell. When a woman begins to bleed from her eyes. Throw in some head explosions and a child zombie who eats his own father and you end up with a pretty fun movie. Hell Of The Living Dead is in my top five of Bruno Mattei films, right next to S.S. Girls, Womens Camp 119 and of course the great Women's Prison Massacre.