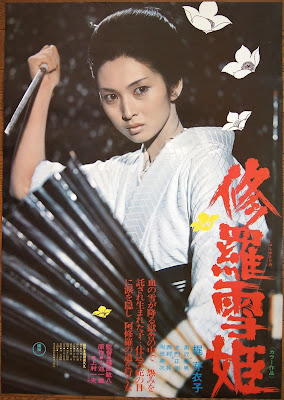 This movie is awesome! If you are new to the Samurai genre Lady Snowblood is usually one of the first you would come by, due to its huge cult following. I would say Shogun Assassin and then this one are probably the two most popular and rightfully so.

Lady Snowblood is a classic Japanese tale of  revenge. The film opens up in a female prison with a dying woman giving birth to a baby girl named Yuki. Yuki's mother was done great wrong in life and decides that Yuki will dedicate her life to vengeance. The newborns fate is already sealed. She will walk the path of revenge and kill the scum who murdered her father and raped her mother. Yuki is raised by a mean-hearted gray haired dude who teaches her to be tough. Similar to so many Hong Kong Kung Fu Films, Yuki goes through a long painful training period and many of the techniques seem quite ridiculous. Especially this one scene where she is put in a barrel and kicked down a hill. I'm not quite sure exactly what that does to train someone in martial arts but it does happen more than once in this movie. Anyway as Yuki becomes an adult she seeks out the bastards that destroyed her family and rips through them one by one with her samurai sword.

Yuki is played by the great Meiko Kaji who you might remember from the Female Prisoner # 701 : Scorpion movies. She is just as bad-ass in this one and sheds enough blood to keep the average gore-hound happy. When it comes to the blood & guts department we have plenty of Japanese style blood spraying, severed hands go flying, a very brutal scene in which a Yakuza gang violently takes turns stabbing a man to death and a very gratuitous scene in which a woman hangs herself and then has her torso cut in half, complete with buckets of pouring blood. On the other hand oddly enough Lady Snowblood does not offer any nudity. That is of course with the exception of a very uncomfortable moment when we see a prepubescent Yuki striped down nude. Although it is the furthest thing from kiddie-porn or anything like that, the scene might feel a bit wrong to Americans.

Lady Snowblood would go on to spawn a sequel in the following year which many don't think holds up to the first films standards. None the less the follow up is still entertaining and action packed. Quentin Tarantino would be heavily influenced by this movie and steal large chunks of it for Kill Bill. What else is new? Lady Snowblood is of course far superior to Kill Bill or anything else that fan-boy Tarantino has ever done. If you dig movies about strong women who fuck shit up and take no prisoners Lady Snowblood is perfect for you. There is nothing negative to say about this movie. Its a masterpiece!