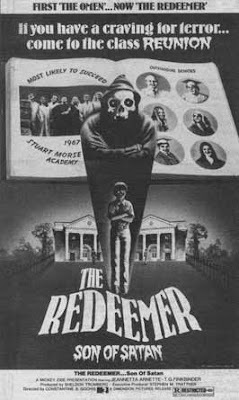 This fairly forgettable slasher film also went under the title of The Redeemer : Son Of Satan. It focuses on six assholes who reunite for a high school reunion . A demented serial killer traps them in the old building and is killing them off one by one in unique ways, with various weapons. None of this makes sense of course because there are windows and doors everywhere. These people deserve to die.

While certainly not my favorite of all slasher flicks it does have some entertaining kill sequences. My favorite of the lot involves a giant sword that is impaled into a victims skull and leaves blood spatter all over the place. This gory moment is sure to put a smile on the faces of gore hounds but unfortunately most of the other murders come off silly and dull. In another highlight a man has his crotch set on fire with a blow torch and its not long before his entire body is bursting in flames. Props to the stunt guy on that scene.

The killer in this one changes costumes constantly. Actually his disguise changes for every kill scene in the movie. Most of the time its too silly to be taken seriously and one can't help but be annoyed at the stupidity of it all rather then any feelings of fear. So as a horror movie Class Reunion Massacre fails miserably. It offers no scares, no thrills and barely any suspense.

While it is definitely better then the late 80's shot on video slasher films, it is still a bottom of the barrel crap-fest, especially for the year in which it was released. The killer in this movie does have a motive. He is some sort of religious nut who is trying to rid the world of its filth. One of the victims is a lesbian, another is very rich and greedy, another is a movie star with to much vanity, etc. These religious undertones run through the entire movie and serve as the killers main motive. It all could have worked quite well if the killer wasn't running around in silly costumes. The scene where he dresses up like Elmer Fudd and blows away a helpless victim takes the cake in the ridiculous department. Its too bad because this one really did have some potential. To top it all off the film tries to pretend it has some kind of metaphoric message when it opens with a little boy with two thumbs coming out of a lake and then ends with the boy going back into the lake. Who is he? Why is he there? Why does he have two thumbs? Who cares! This movie can not fool me. It is to dumb to have a message.

If you feel the need to watch this one, do it with a group of friends and quite a bit of alcohol. You are going to need the support. 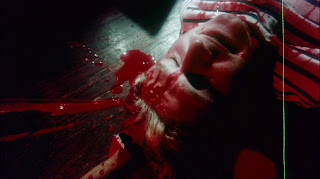