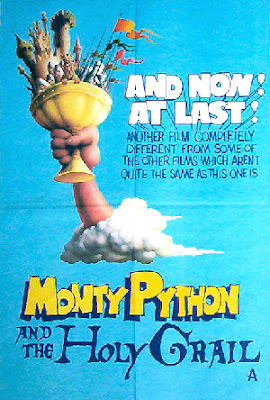 If you haven't seen this one, you must have been living under a rock. Monty Python And The Holy Grail is as classic as they get. Being one of the best comedies ever made and certainly one of the most popular films to come up in discussion of the comedy genre it safe to say that anyone who knows anything at all about film has seen this movie.

There is no reason to discuss plot when it comes to this movie because it is as random as they come. It is jam packed with absurdities and random acts of nonsense. Monty Python And The Holy Grail is a masterpiece in retard-ism. While excessive viewing may cause brain damage... at the very least you will be laughing. It blends political humor with a history, fables and of course idiotic madness and mayhem. While todays comedies try really hard to shock audiences with sexual themes and sometimes random act of violence. Holy Grail mastered this way back in the 1970's.

Some of the films highlights include a killer rabbit which tears the throats out from anyone who crosses its path causing blood to spray about in a Japanese cinematic fashion, a goofy Frenchmen atop a castle who throws absurd insults around "I fart in your general direction", a brave knight who has all four of his limbs chopped off and continues to fight "Its just a flesh wound", Then we got some naughty nuns who want a night of spankings and oral sex. The classic witch burning scene always sticks out in mind and the anarchist peasants who fight the oppression of King Arthur. "help I'm being oppressed! Did you see him oppressing me?"  Don't forget the knights who say "NEE".

This stuff is moronic and genius at the same time and it has proven to be a timeless piece of cinematic trash which is respected by the old and the young and if you don't like this movie it is probably because "Your mother was a hamster and your father smelt of elderberries!"

Email ThisBlogThis!Share to TwitterShare to FacebookShare to Pinterest
Labels: Monty Python And The Holy Grail