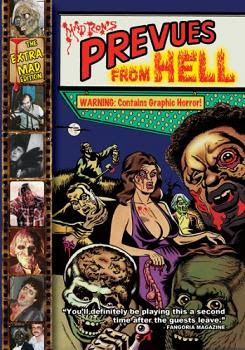 I love these 80's compilations of horror trailers and Mad Ron's Prevues From Hell is a out right gory one. Many of these trailer comps. followed some kind of silly story to link all the trailers together and although unnecessary sometimes they can be amusing but most the times they are just annoying and embracing. This one on the other hand is kinda funny and they threw in lots of their own gore bits between the trailer mayhem. 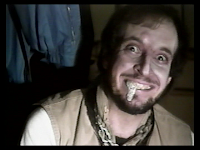 This one is hosted by some balding pedophile looking guy with a decaying puppet on his lap. I guess every balding kiddie toucher needs a good way to lure kids into their homes and this guy chooses to be a ventriloquist. I suppose he would have succeeded in getting me into his house if he had a talking zombie on his lap and promised to show me some of the goriest trailers of all time.

Anyway the zombie puppet comes off like more of a pervert then the ventriloquist because he keeps talking about his "dick" and he has some very rude language. I of course have the sense of humor of a 5th grader and find it pretty funny.

Well anyway, this foul mouthed duo reside in a movie house and the walls are plastered with cool horror posters. When the movie house is invaded by flesh eating zombies. Our host goes into the basement where Mad Ron is chained up and drooling on himself and the dig out some of Ron's trailer reels. Once the trailers start rolling the zombies sit and watch as did I.

Here's the list of amazing trailers on this compilation.
I Drink Your Blood/I Eat Your Skin
Texas Chaisaw Massacre
Deranged
3 On A Meathook
The Corpse Grinders
The Undertaker And His Pals
Love Me Deadly
Children Shouldn't Play With Dead Things
The Maniacs Are Loose
Cannibal Girls
Torso
Blood Spattered Bride/ I Dismember Momma
Ghastly Ones
Wizard Of Gore
Beyond The Door (aka Let Sleeping Corpses Lie)
Deep Red
Sisters
Devils Nightmare
House Of Exorcism
Lady Frankenstein
Flesh Feast
Tales From The Crypt
Vault Of Horror
Horror Of The Zombies
Bloodeaters
Orgy Of The Living Dead
Revenge Of The Living Dead / Curse Of The Living Dead / Fangs Of The Living Dead
Diobalacal Dr. Z
Africa Blood And Guts
Night Of Bloody Horror
Black Christmas
The Mutations
The House That Screamed
Blood And Lace
2000 Maniacs
Night Of The Living Dead
God Told Me To
Horror On Snape Island
Ilsa She Wolf Of The S.S.
Man From The Deep River
Last House On The Left
Carnage
Color Me Blood Red
Mad Doctor Of Blood Island
Silent Night Bloody Night
Bloody Pit Of Horror
Night Of The Bloody Apes

With a trailer list like that, how can any gore-hound, trailer-junkie not blow a load over this thing. The movie also offers a gore gag involving some exploding eyeballs. Mmmmmm Gore! A must own of any true splatter loving sicko! 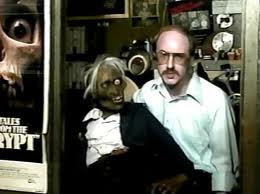