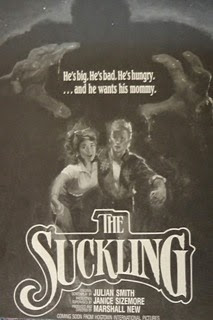 This one plays like a cross between a Troma movie, a Frank Henenlotter film with a touch of John Waters. The Suckling also went under the title Sewage Baby which is arguably the better title.

A pregnant woman and her boyfriend go to see Big Mama, who runs a local brothel with a secret abortion operation upstairs. Right off the bat you know this is gonna be a classy one. Big Mama rids the pregnant one of her problem and flushes the fetus down the toilet. We watch the fetus go down the drain and land in sewers. When raw sewage pours into the drainage system the fetus begins to mutate and becomes a monster with a thirst for human blood. Its not long before the killer baby is coming up out of the toilets and pulling the heads off of the houses prostitutes in gory detail.

The degenerates within the house become trapped inside when the house is coated with a strange placenta like substance. I guess you can say in a way the house almost becomes a womb and the hookers, pimps, madams and perverts are all stuck inside with the rapidly growing, mutant, monster-baby. One can't help but wonder if there is supposed to be some anti-abortion message going on here but the total depravity and sheer bad taste of the film would suggest otherwise. If there is some kind of moralistic metaphor going on in this one it was certainly executed horribly. On the other hand if you are a fan of exploitation films or just trash films in general this one is a pretty entertaining watch.

Being a fan of The Suckling I am the first to admit that there is a lot of problems with the film. First off its supposed to be set in Brooklyn. Being a New Yorker myself I can say that this thing was certainly not shot in Brooklyn. The whore house is in the suburbs somewhere and it takes place in a giant mansion. If the Suckling was shot in New York at all I would guess it was upstate somewhere. Anyway aside from this, the acting is pretty horrendous with the exception of one blond hooker who offers a believable performance from time to time. The rest of the cast is extremely wooden and have a sort of shot on video feel to them. However The Suckling was not actually shot on video. They did have the decency to use film. A low grade, bottom of the barrel film yes... Perhaps super 8 but at least its film.

For me the films worst aspect is how annoying the characters get at times. The entire cast in The Suckling is  constantly bickering and arguing amongst themselves. At times its funny and reminds me of a John Waters film but other times it gets quite irritating. I suppose in a way this works because it makes you despise just about every character in the film and when the get killed off it makes you so much happier. Everyone in this movie is on some kind of a power trip. Its almost as if they took Mr. Cooper from Night Of The Living Dead and molded every single character after him.

On a more positive note, just about everybody dies. The monster in this movie is awesome. It looks like a cross between Pumpkinhead and the monster in Entrails Of A Beautiful Woman. The Suckling doesn't lack in the gore department either. We have decapitations, slit throats, gunshot wounds to the head, electrocution and a great moment where the Sewage Baby retreats back into its mothers womb. Some of the other highlights include a rape scene gone wrong, in which the monster interferes and a hilariously raunchy scene where a prostitute preforms some dildo-fu on a obnoxious client.

As a hole The Suckling is a entertaining piece of filth and its very surprising that this thing came out in 1990. It certainly is better then most of the other stuff coming out of America at this time and its well worth a watch for fans of this kind of smut.