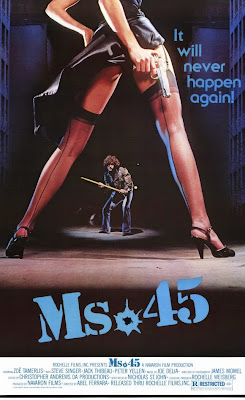 Ms. 45 is one of the best rape revenge films ever made. This one takes the familiar rape/revenge concoction and sends it off in a totally different direction. Between Abel Ferrara's brilliant direction and Nicholas St. John's writing, Ms. 45 becomes more of a piece of art to be debated and discussed rather then pure exploitation. While the film does still manage to hold those beloved elements of an exploitation film, it seems to be something more. Something with a controversial theme. That theme is of course feminism.

Zoë Lund does a brilliant job in this movie. Her acting is on point and she gives the main character Thana so much life. Considering Zoë Lund was only 17 years old when she took this role on, makes it all the more astonishing. Thana is a silent mute who seems to be completely disgusted with the male gender. This repulsion will of course grow when she has the worst day of her life. On her way home from work with her sleazy boss Thana is harassed by the droves of horny men on the New York City streets. They give her all the usual "hey baby, hows it going" pick up lines, blow her kisses and whistle at her as she walks by. Before she gets home to her apartment she is pulled into an alley by a masked rapist played by no other then directer Abel Ferrar.

The rapist comes complete with a gun and one of those creepy translucent masks from movies like Alice Sweet Alice and Last House On Dead End Street. The masked scumbag rapes Thana at gun point and makes it a point to tell her "See ya, later. I'll be back baby". Thana picks herself up from the filthy city street and makes her way back home only to realize that another man has broken into her home. When the burglar finds nothing worth stealing he takes it out on the freshly raped Thana and yes you guessed it, she is raped again. This time around the rapist doesn't get away so easy. Thana picks up a clothing iron and caves the dirt-bags head in.

Since our main character has been sexually assaulted twice in one day, I think it is safe to say that she might not be so mentally stable. Her repulsion for men grows to a deep hatred and its not long before she goes on a brutal killing spree of revenge with the loaded gun she stole from the now dead rapist. One of the things that makes Ms. 45 so much more interesting then the average rape/revenge flick is the fact that the main character isn't really acting out vengeance on the ones that did her wrong. Instead she takes her anger out on the entire male gender. This would of course be explored again in a later French film called Baise-Moi (2000) but it was done much more effectively in Ms. 45.

It is this thought provoking feminist theme that so often brings Ms. 45 into discussion and debate. While it is arguable that all or most rape/revenge films have the underlining message that ALL MEN ARE SCUM!!! This movie takes it to a new level. However I feel that most view this movie slightly wrong. While at first glance it may seem that  Zoë Lund's character is the ultimate feminist, it doesn't mean that the film is a pro-feminist movie. In fact it portrays her more as a damaged human being with many social and probable mental disorders. In this review I used the word repulsion a lot because the character of Thana greatly resembles the disturbed character of Roman Polanski's Repulsion (1965). In fact the similarities are so great that I am almost positive that Ferrara and the Ms. 45 crew were highly influenced by Polanski's horrific art-film. Damaged in the brain or not the audience can't help but love the character of Thana. The remainder of the film we watch the fem-fatale blow away men with her beloved pistol. Some of them seem to deserve it and others... not so much. It all comes to violent end where Thana dresses up like a nun and massacres the men at a Halloween party.

Ms. 45 has the perfect blend of art and exploitation. It comes complete with locations from the great genre film Death Wish, a pretty cool musical score and it really captures the mean streets of NYC in a time long past. A must see for genre fans.