What we have here is a compilation of Midnight Blue moments concerning celebrities other then porn stars. Midnight Blue Collection volume 3 offers up some truly hilarious moments. My favorite interview is probably with Gilbert Gottfried in which he tells big Al that "Pussy tastes like chicken" and that he will fuck just about any animal in the world except Al. Goldstein laughs so hard in his Gottfried interview that he can hardly catch a breath. Another amazing moment is in the Debbie (Blondie) Harry interview where we learn that Debbie has fucked black men and "they don't necessarily have larger dicks then a white man" she also enjoys the taste of pussy and has had quite a few lesbian experiences. Then we have a very bizarre chat with Tiny (Tip Toe Through The Tulips) Tim where he tells us of his strange and creepy sexual habits. This has to be seen to be believed. Amongst the others who show up is Al (Grandpa Munster) Lewis, Russ Meyer (Faster Pussycat Kill Kill), Arnold Schwarzenegger, O.J. Simpson, R. Crumb, Larry Flynt and Penn & Teller.

Aside from the interviews we get the official SCREW YOU!!! rants from Al Goldstein and we hear his hatred for the likes of Jane (Barbarella) Fonda... How can anyone hate Jane Fonda?, Jack Nicholson, Sean Penn, Howard Stern and Donald Trump.

We also have plenty of filthy infomercials and some pornographic sex scandals caught on film such as the Barbra Streisand stag film, Robert Lowe's sex tape and that stupid tape in The Go Go's dressing room.

Midnight Blue is the kind of humor that is a perfect for those who aren't up tight, dislike censorship and are perhaps a bit on the the perverted side. If you do not fit into these categories I feel its okay if I speak for big Al. Fuck You!!! 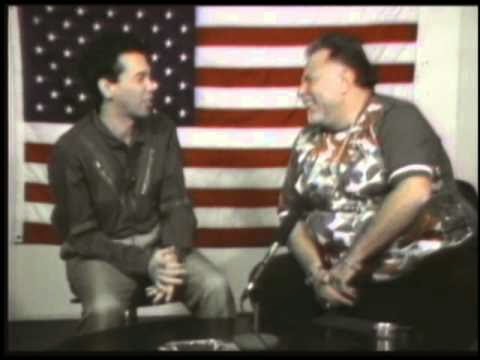