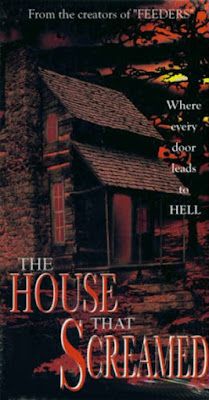 This was a big mistake on my part. The House That Screamed not to be mistaken for the 1969 movie with the same title is a typical shit-fest from the awful 2000's. While the 1969 House That Screamed is also a terrible waste of time, this one takes the cake with bad acting, bad camera work and nonsensical story with random ghostly happenings and bad special effects. 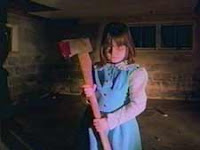 This one opens up with some gratuitous nudity in the form of a shower scene. This goes beyond gratuitous nudity because the scene seems to have just been thrown in after the fact. This naked bimbo isn't even seen again in the movie. While I do thank the filmmakers for the bare breasted action the rest of the movie is a turd.

A horror writer rents a haunted house for inspiration on his new book. He personally doesn't believe in ghosts but figures it will help the sales of his new novel. While staying in the house he is haunted by vicious ghosts who wish to do him harm. Things happen without explanation and none of it makes much sense. Eventually he "enters the belly of the beast to understand the secrets of the house that screams". He learns that the house holds a vicious cycle and in order to free the spirits of the house he must take his own life. Stupid eh?

Perhaps the most offensive moment in this one is when our horror author is fooled into having sex with a ghost. The female ghost is supposed to add some kind of sex appeal to the movie but she is a over weight, red headed chud with horrible acting skills. When the writer finally gets her in the sack she rides him with her clothes on which is lucky for us. Next her face rots away in what is oddly reminiscent to Evil Dead makeup. I'm not so sure why our writer is so upset. Did he see who he went to bed with? Its not as if he were drunk at a bar and thought he was going home with Barbie only to realize he was waking up with King Kong. This dude was sober and willingly hit the sheets with this beast.

Some of the other atrocities this one has to offer is a suicide scene in which a girl puts a gun in her mouth and blows her brains out all over the kitchen window. Sounds good, I know but you have to see this shit. The gunshot sounds like a fart and the brains hitting the window looks like play dough with a sound effect lifted from The Blob. Next there is a demonic doll which wrestles our character in the kitchen. We also have a little girl running around with an axe and a ghost who died in the civil war. The civil war? What the fuck does that have to do with this house?

Stay away from this movie unless you really like torturing yourself with nonsense. 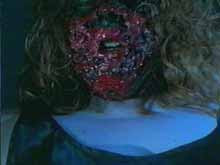 Email ThisBlogThis!Share to TwitterShare to FacebookShare to Pinterest
Labels: Hauntings And Ghosts, House That Screamed (2000)