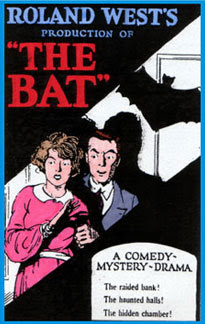 The Bat, not to be mistaken for the 1959 Vincent Price film of the same title. This one is a old time silent picture. While certainly not the best example of a horror mystery from the silent era The Bat does have some interesting elements to it.

Like The Phantom Of The Opera and so many other silent films of the time The Bat is another killer phantom movie but in this one the character of The Bat is quite ridiculous to look at, The cloaked phantom is terrorizing a New York mansion which I believe is very close to my home in Oakdale Long Island and running amok in his silly bat costume. Most of the film is a game of cat and mouse as The Bat scales walls, runs across roofs and hides in the shadows. Sound a little familiar? I can't say for sure but there seems to be quite a few similarities between this phantom and the super hero we know as Batman. There are many scenes of the phantom bat swinging from buildings by rope but he comes off more like a super villian rather then a hero. The Bat even uses a logo which is oddly reminiscent of Batmans and one can't help but wonder if the Batman creators took some inspiration from this movie.

The film itself gets a bit tedious at times and tends to bore. It tries so hard to be a good mystery and we have way to many characters none of which are all that interesting. This one does offer a bit of racism against the Japanese butler who is often referred to as "Jappy". Naturally some of the characters think that Jappy is The Bat but you will have to figure that out for yourself. "That Jap gives me the willies". It all eventually comes to a somewhat abrupt ending with some witty booby traps.

Its a little hard for me to recommend The Bat to anyone considering there are so many better silent movies out there. Lon Chaney's filmography alone is far superior to anything this one has to offer. However it might be an interesting watch for Batman fanatics. I personally am not a big comic book guy but I would love to know if there are any other similarities between the two characters. The director of this would go on to do a remake of it in 1930 called The Bat Whispers but I don't think I have seen that one to date.

Email ThisBlogThis!Share to TwitterShare to FacebookShare to Pinterest
Labels: Bat (The) (1926), Silent