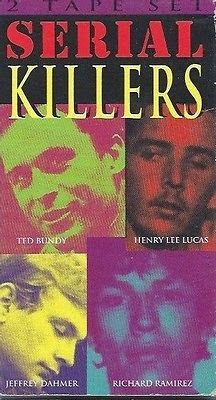 This tape is a bit of a mystery. I picked it up in the dollar bin at the local video store not really expecting much. When it turned out to be a decent documentary I was honestly surprised. However I wasn't really able to find any information on this thing at all. In fact I'm not even sure it was actually made in 1994. I'm just going by the copyright on the back of the tape and we all know that really doesn't mean shit.The documentary itself has no credits, so it offers no clues to the writer, director or narrator. On the other hand this generically titled VHS isn't exactly worth making a life time search to find its origins.

Aside from being a total mystery this has to be the fastest paced documentary ever made and thats what I liked about it. It opens up with Charles Starkweather and zips forward with a very fast speaking narrator. Before you can say "sociopath" we are on to the Green River Killer. This one covers so many of America's most infamous serial killers, one at a time. We get a bit of back story on each of the psychos and then of course a lesson on the true crimes they have committed. Being a bit of a serial killer buff I tended to fill in the blanks on my own because at times this movie is to fast for its own good. By the time it got to Edmond Kemper, I felt that it only covered the loony for about five minutes. How can you only spend 5 min. on a guy like Ed Kemper? There is so much to say about him. Anyway this was a pretty good find considering it was only a buck. Worth a watch for serial killer and true crime buffs just for the fun speed of it all but don't expect to learn anything new. It really keeps each maniac pretty brief. On the other hand if you don't know much about these people it would probably serve as a great introduction to each of them.
Posted by Paul Awful at 9:10 PM