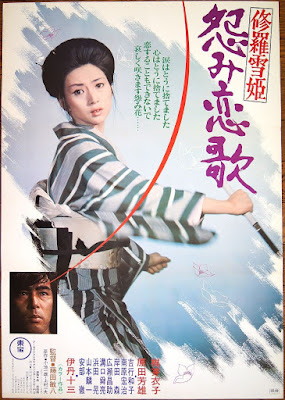 One thing that I have noticed over the years is that its pretty normal for Samurai films to be heavy on politics. Many times it seems that the film itself serves as a coverup for a political message. The films of Akira Kurosawa are often about political power and the destruction of systems. While Kurosawa's films always keep the viewer interested some Samurai movies can get confusing and boring with this subject matter. As wise men say, never speak religion or politics at the diner table. I can't help but think that many of these movies, especially the more exploitative titles would have worked better without such a heavy political subtext. The Hanzo : The Razor series for instance. Some of those would have clearly been better off without the political mumbo-jumbo.

This follow up to Lady Snowblood sports the same director and of course the same leading lady. It still manages to entertain with its excessive violence and bloodshed but it gets way to political for its own good. This one starts off with Yuki a.k.a. Lady Snowblood on the run from the police. She rips thru dozens of them with he Samurai sword but is eventually captured and sentenced to death. She is ultimately rescued by some political types who in return want her to assassinate an anarchist. From here the movie gets pretty confusing with to much governmental talky talk. Lucky for us the gore and carnage continues throughout the films entirety.

The overkill on politics is not the only problem with the sequel. The choreography in the fight scenes doesn't seem as well planned as the original film and the cinematography doesn't hold up either. The truth is that Lady Snowblood 2 is still fun and worth a watch for fans of the first film but I don't think there is anyone out there who would prefer this to the original. Then again its hard to hold up to such high standards. After all Lady Snowblood is one of the best exploitation Samurai films ever made.