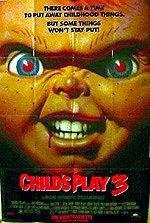 Here's another Childs Play movie written by brain child Don Mancini. I will give this writer credit for sticking with his love for the little, red-headed, murderous, doll but the thing that probably hurts this series so bad is the fact that each film had a different director. It becomes apparent that aside from Don Mancini everyone else probably took this thing on strictly as a business deal.

While I wouldn't consider the Child's Play series to be the worst franchise of all time, it also isn't all that good either. Personally thinking the first film was a little on the lame side and preferring Child's Play 2 it would have been nice if the third film was even better. This however is not the case. Child's Play part 3 is pretty crappy with minimal gore and very uneventful kills. The film relies more on jokes and silly tongue in cheek moments that come off more embarrassing then actually funny. Sure Chucky is known for his silly one-liners but it is usually followed with a bloody death sequence. "Don't fuck with Chuck" is probably the most memorable of all the cheesy lines in this one and I think this movie is the first time we ever see Chucky flip the middle finger.

In case you forgot Chucky explodes in the end of the last film but its okay because the Good Guy franchise will yet again salvage the pieces and rebuild the psychotic doll. Once Chucky is back up on his own two feet he wastes no time getting back in to the swing of things. First he kills the greedy owner of Good Guy Dolls with a golf club to the achy-breaky skull. Then the film takes an odd turn and brings Chucky to a military school where he will be reunited with little Andy Barclay who is now eight years older. I guess Chucky only likes young boys because he decides that Andy is no longer the body that he wants to possess and in stead moves on to a young black boy named Tyler. In what just might be the best moment in the movie Chucky tells Andy Barclay that he is going to possess the body of Tyler with these lines "Just think, Chucky's gonna be a bro".

during the 90 minute running time we will witness Chucky slash a mans throat with a straight razor, put live rounds in the rifles during a training event in which a few kids will get shot, he blows a nerd to bits with a hand grenade, crushes a man in a garbage truck and in a very lame scene gives a man a heart attack. The violence is totally dulled down in this one and the only moment in the film with any kind of cool special effects is the climax when we witness Chucky being mangled.

Even as a kid I didn't really like this movie. If I never see this one again, I will be just fine. Child's Play 3 is amongst the worst in an over rated series.