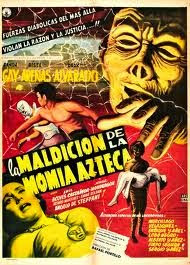 This 1957 follow up to The Aztez Mummy is yet again not a example of great cinema but the like Rock N Roll Wrestling Women Vs The Aztec Mummy it gets entertainment points for how bizarre it all is. 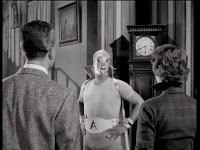 This low budget Mexican crap-fest blends classic horror, Monster Movies with Mexican wrestling Lucha Libre madness. It's silly and short but still manages to get a bit tired in some of the talky scenes. While The Curse Of The Aztec Mummy clocks in at a short 65 minutes it feels more like a full length feature due to the slow pace of the movie.

The evliv Dr. Krupp is back and wants to get his hands on the ancient jewels in the mummy's tomb. Krupp concocts a plan to abduct a scientists wife and hold her for ransom in exchange for a translation of ancient hieroglyphics that behold the secret hiding place of the jewels. However Curse Of The Aztec Mummy shifts gears and gets a bit more fun when a masked super hero shows up to kick the evil doctors ass. At first glance one might think that is El Santo up there. Wait why does Santo have a anarchy symbol on his belt. Ohhhh wait, that isn't El Santo at all. This silver masked Mexican wrestler is El Angel. Of course we all know El Angel. Wait... who the fuck is El Angel? 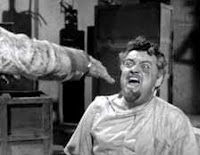 Anyway since the Aztec Mummy doesn't show up until the lats ten minutes of the movie El Angel is really our main source of entertainment here. Don't worry we do get to see this masked hero jumping around in his horribly fitting leotard, kicking the ass of every thug in the movie. However Angel seems to lose just about every fight. He gets captured over and over again and one can't help but wish Santo was doing the action scenes here. Before the film is over El Angel has his mask removed and we learn his true identity. Everyone in the movie acts surprised but I kinda just thought to myself, who cares? When the Aztec Mummy finally shows up in all his rotted glory he seems to have a certain preference to who he attacks. It all comes to a rather abrupt ending and left me wondering why they felt the need to make more of these stupid Aztec Mummy movies.

This one is only for lovers of really bad monster movies and lucha libre antics. It's silly, poorly acted, poorly lit and generally slow but on the other hand it is a sort of strang comic book film and gets points in the bizarre and unintentional humor departments. 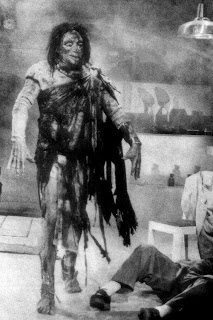