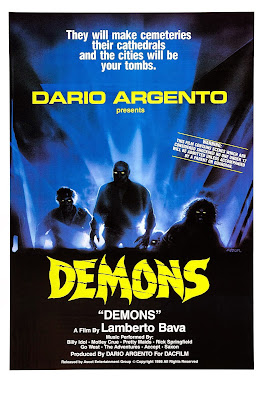 Out of all the movies that I have ever caught on the big screen, be it a midnight movie, a creature double feature or a all night horror festival, I believe Demons is the one movie that I have probably seen the most times with an audience. While Demons never seems to get old for me, this weekend I had the privilege of seeing it yet again with an audience, however this time I watched it the way the gods intended it to be seen. At the drive-in of course!

Seeing this blood drenched monster flick under the stars amongst rows of cars filled with gore-hound ghouls was an experience all in its own. The film print looked great and the reaction was what one would expect from such an awesome crowd. For those who have never seen Demons, the basic plot although full of holes... is about a group of people who get trapped inside of a movie theater while an untitled horror film is playing. While this may not sound like the worst thing that could happen to someone, things do turn for the worse. Its not long before members of the audience are being attacked by blood-thirsty Demons from hell.

Its a good thing that this movie is so much god damn fun because the story is as stupid as they come. If you try to follow this thing with any kind of logic you are bound to end up scratching your head in confusion. Things seem to happen for no apparent reason and there is never any explanation to back them up. Normally this would piss me off to no end but Demons is something special. The gory spectacle that splats across the screen is so damn entertaining that you tend to ignore the fact that the whole thing is really brain-numbing and dumb. The Demons cult following rightfully so usually has a strange obsession with the character of Tony played by the great Bobby Rhodes. Tony is a jive-talking, foul-mouthed, black-pimp who takes two of his bitches to the movies. When his main girl Rosemary (Geretta Geretta) becomes a Demon and rips her friends throat out Tony, or super-pimp as I like to call him, takes charge of the situation and leads the movie-house crowd down a path of survival. It is a combination of the dialogue and the dubbing that makes Tony the super-pimp a cult icon of his own. Sometimes I feel that there is a bigger fan base for this character then the actual movie.

Partially written by Dario (Suspiria) Argento and directed by Lamberto Bava (Macabre), I think its safe to say that they pulled much of their inspiration from George A. Romero's Night Of The Living Dead. Super-Pimp is kind of like an over the top version of the character of Ben from NOTLD. This of course even stranger when you think of where Demons comes from. It is of course an Italian film and I can't think of any other Italian film that portrays a black man as such a beloved bad-ass. I guess they knew there was going to be a bigger market for this thing in the United States and risked it. I just can't see Italy loving this character in the mid 80's the way us Americans do. Long live Super-Pimp!

Aside from Bobby Rhodes character Demons sports one gory special effect after another. It comes complete with eyeballs being pushed into the sockets, throat ripping, teeth falling out, exploding latex pimples (complete with green puss), scalping, strangulation, stabbings, torsos are completely ripped open from the inside and of course plenty of flesh chomping. This thing played in the drive-in as part of a weekend long zombie festival. While I personally do not really consider Demons to be a zombie film, it does have enough of the elements to work amongst them. Apparently demonic possession is transmitted thru saliva just like zombie-ism because thats how these monsters wreak their havoc.

If you like fast paced, insanity mixed with heavy metal and pimps then Demons is a must see. Its pure splatter-house entertainment and plot comes second.