This one comes from the director of the awesome 1950's monster movie The Monster Of Piedras Blancas. Jumping forward to the sick and twisted 70's there is no doubt the depravity would have to be amped up to ten.

Hitch Hike To Hell is one of those pre-slasher sickies from the 70's about a sex-maniac terrorizing young women. You know the type. This one follows a mammas boy named Howard who comes off like a cross between Norman Bates and Jim Carrey. A normal day for Howard consists of going to work where he drives around this big red, goofy van and drops dry cleaned laundry to customers. More often then not Howard picks up female hitch hikers, rips their clothes off and strangles them with wire hangers. You see its not that Howard hates hitch hikers. He just hates run aways because his sister ran away from home and upset his mother. 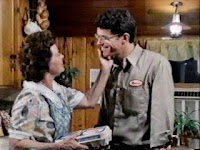 After a hard day at work and strangling young run away girls Howard goes back home to Mamma and drinks root beer. I'm not making this stuff up. Howard is a total geek. Root beer comes up quite often in this movie but in one of the films most memorable pieces of dialogue, Howard asks his Mamma if he can "go down to Swanson's for a root beer". Naturally his worried mother doesn't allow it because boys shouldn't be out after dark. Little does mommy know that Howard is a bat-shit loony who gets his jollies off by killing young girls. The Professor from Gilligan's Island shows up here as the police chief and it is his job to catch Howard and put an end to all the senseless killing.

This one ends up getting a bit repetitive after a while. Go to work, strangle a girl, go back home and drink root beer. Still it manages to be entertaining enough to make it through the duration but the replay value is not so high on this one. It does throw in a random scene where a confused Howard meets his first flamboyant homosexual and an unexpected scene with a very young murder victim. Hitch Hike To Hell is a average time passer for those who really like 70's movies about sicko's. Just don't expect to much.