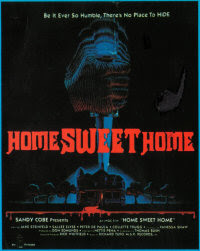 I first saw Home Sweet Home back in the VHS days when all young teenagers would rent slasher movies and brag about who saw the goriest movie in the school cafeteria. Even in my early teens I knew that this was by no means a great example of a horror film but I absolutely loved it. Looking at it now as a much more jaded adult, I still really enjoy this mess of a movie.

Home Sweet Home is a typical stalk and slash flick about an escaped lunatic who enjoys shooting hard drugs into his tongue. The intravenous injections send this hulking madman into fits of rage and psychotic laughter. His obnoxious laugh is heard through the entire film, while we watch him smash and slash his helpless victims.

While most of these early 80's Halloween ripoffs conceal the killers identity, Home Sweet Home never even attempts to cloak the killer. He is right there in your face from the very beginning and I personally love this spastic psycho.

Most of the characters in this one are pretty lame and most viewers are probably waiting impatiently to see them die one by one in unique ways but there is one totally bizarre character who I can't help but love. There is a sort of punk rock mime running around with a guitar and amplifier strapped to his back. Anyone familiar with the British punk band The Adicts will surely get a kick out of this face painted nut-job. He is an obnoxious prankster who annoys just about everyone in the movie with his rock & roll. He runs in on couples having sex and pulls hard boiled eggs out of his mouth during diner parties. Unfortunately he gets fried to a crisp when the killer catches up with him. 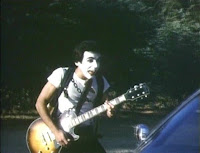 We also have a sexy Latina babe who gets down to her bra for us and gets cut up with a big Rambo knife. Another dude is crushed under a car hood in what might be the most absurd death scene in the movie. We do get a bit of tit and of course a final girl who gets to see the demise of our junkie-psycho.

If you are looking for a serious slasher flick you might want to skip this one all together. There are plenty of slashers that came out this year. In fact 1981 was the slasher boom. However if you are in the mood for something ridiculous that never takes itself too seriously then Home Sweet Home is well worth a look. Its crazy, silly and still manages to deliver the goods! 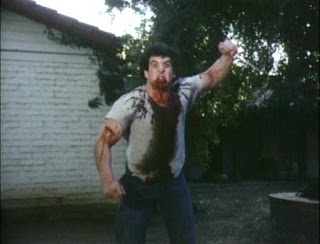