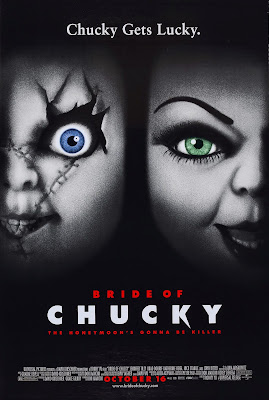 Bride Of Chucky has always been my favorite in the somewhat shitty Child's Play series. It may be lacking in the violence department but where Bride falls short in that area it makes up for it with comedy in pure bad taste. This one goes way over the top when it comes to good raunchy humor.

Jennifer Tilly plays Tiffany, the ex-girlfriend  of the late Charles Lee Ray. She has spent ten years tracking down the remains of the doll. With the help of some sewing needles and a staple gun, its not long before Tiffany has Chucky looking like Frankenstein's monster. With the help of her "voodoo for dummies" book, Tiffany manages to yet again resurrect the soul of Charles Lee Ray into the infamous Good Guy doll. Once Chucky is brought back to life he wastes no time and kills off Tiffany's cheesy, goth, boyfriend. This pussy makes Marilyn Manson look like a hetero sexual. Chucky rips the 90's-bastards lip rings out and smothers him with a pillow while he watches the hot Jennifer Tilly shake her thang.

Tiffany and Chucky start butting heads when Tiffany learns that her serial killer boyfriend never had any plans of marrying her. In one of my favorite scene Jennifer Tilly takes a bubble bath and watches Bride Of Frankenstein. Too bad for her she never sees the ending of the movie because Chucky throws the television into the tub and fries the sexy blond alive. Next Tiffany is resurrected into a doll of her own and the two dolls go on a killing spree while trying to get to the grave of Charles Lee Ray. During the course of the movie we watch the murderous dolls send nails flying into a police officers face, blow another cop to bits in a car explosion scene, knife a man to death and kill a newly wed couple on a water bed with shards of glass. However since this one was done in the late 90's and came out seven years after Child's Play 3 there isn't very much gore to gawk at.

What really makes this one so funny is seeing how the two dolls interact with each other and even other people. In what is probably the most memorable scene we watch Chucky get it on for the first time ever. They even used that as the tagline, "Chucky gets lucky...". Chucky gives it to Tiffany doggy style and delivers the great lines "I don't know about you but I'm beginning to feel like Pinocchio over here" and Tiffany has this to say "I wonder if all the plumbing works". Now that is just great. This of course all ends really badly and the couple fights over who is worse in bed, just like real married couples. It all comes together with a twisted ending in which Tiffany shits out a bloody baby getting us ready for the next sequel, Seed Of Chucky, which is just awful.

Bride Of Chucky is without a doubt the best in the series. If you are only going to watch one, it might as well be this one.

Email ThisBlogThis!Share to TwitterShare to FacebookShare to Pinterest
Labels: Bride Of Chucky, Possession And Exorcism, Slashers