This one also went under the great exploitation title of Crazy Fat Ethel which is probably a bit more memorable then Criminally Insane but the truth is both names work for this sickie from the 70's. No matter what you chose to call this one, you are not likely to forget it anytime soon. Criminally Insane is a all time favorite of mine! 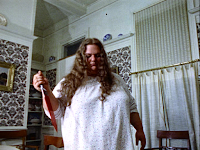 Criminally Insane is great on so many levels. All the greatest elements of a demented 1970's movie can be found here. It's extremely gritty, it's both intentionally and unintentionally hilarious, it's vile and extreme. For these reasons this one has a ton of replay value and works perfectly as a party movie to entertain a group of friends or just a pleasant rewatch while on your own. Priscilla Alden plays Crazy Fat Ethel, a psychopathic tub of lard who was just released from the psych-ward. Now back home with "granny" Ethel swears that the doctors were trying to kill her by starvation while she was away. Of course this is all just in her damaged brain and most likely Ethel was being fed three square meals but none the less, Ethel is never going to hungry again. 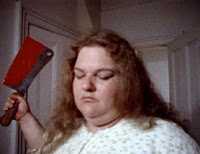 Granny tries repeatedly to get through to Ethel about watching her weight and food in take. When granny tells Ethel that her heart is at risk Ethel has this to say "My heart is just fine as long as my stomach isn't empty". In a brash decision granny decides to put locks on the food cabinets and ration out Ethel's food appropriately but this sends Ethel into a psychotic fit and before to can say "feed me Seymour", Ethel stabs her dear old granny to death with a big ole kitchen knife. Now Crazy Fat Ethel has the entire house to herself and we are treated to scenes of the obese slob scarfing shit-loads of food down her gob. We watch Ethel fry up a full pound of bacon with about a dozen eggs, eat the worlds largest bowl of ice cream, down full boxes of cookies and some how she never feels quite full. When you mix the scenes of over the top violence with the gratuitous eating it leaves a funny but nasty taste in your mouth. Sex and food is one thing but food and meat-cleaver gore is another.

In some ways Criminally Insane reminds me a bit of Don't Go In The House, which would hit the big screen four years later. While the two movies are very different, even with the obvious gender change in our psycho's, its something about the mind of a compulsive loony who gains a demented sense of freedom when they have the house to themselves. With nobody to stop Ethel, it is inevitable that the bodies will continue to pile up and eventually she will self destruct. In this way Don't Go In The House and Criminally Insane have similarities but then again maybe I'm looking a bit to deep into this. I'm sure some ass-hat would say that Home Alone has the same outcome. Anyway the bodies do pile up and its not long before Ethel's place stinks like a cross between John Wayne Gacy's crawlspace and a slaughter house. 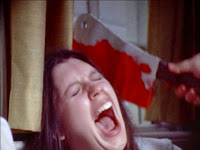 While I have never heard anybody refer to Criminally Insane as a sexy movie it does seem that it tried for some sex appeal when Ethel's sister Rosalie shows up. If this in fact the case the film makers failed miserably here. Rosalie is a battered prostitute who spends most of her time doing cocaine, drinking beer, bringing home johns and of course being beaten by her pretty-boy boyfriend, whom wears makeup. However on the other hand makeup can not save Rosalie. She is quite offensive to look at. Something about her face makes me wanna smash my television, so when she falls victim to Crazy Fat Ethel it is always a nice little treat. In one of the films strangest moments Rosalie asks her makeup wearing boyfriend why he beat the shit of her. He delivers this amazingly misogynistic line "Rosalie I'm gonna tell you the truth. You need a good beating once and a while. All Women do but especially you". Of course these words of beauty turns Rosalie into putty and she is back in her abusive boyfriends arms before we know it.

Eventually Ethel's killing spree gets out of hand and people start catching on to her. There was a sequel to this in 1987 which I have not been lucky enough to see yet and another two movies staring Priscilla Alden where she plays a psychotic nurse. Unfortunately I haven't seen the Death Nurse movies either but they are on the list of things to do. However I believe they were shot on video and I highly doubt they hold the same entertainment value of Criminally Insane.