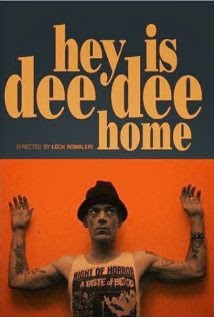 Hey! Is Dee Dee Home? was never intended to be a feature film. The director Lech Kowalski who was responsible for punk cult classics such as D.O.A. and Story Of A Junkie was finishing up his Johnny Thunders documentary, Born To Lose : The Last Rock & Roll Movie when he realized he had enough Dee Dee Ramone interview footage for a 64 minute film.

Well thats exactly what you get with this one. Left over scraps from another film, which tells the life story of Dee Dee Ramone. Personally I always enjoyed Dee Dee Ramone interviews. I find the punk rock burn-out to be extremely interesting and entertaining, so this movie is actually pretty cool for a guy like me. However, I could see how most people would really not be into this thing... even Ramones fans. During the filming of this Dee Dee was apparently clean from heroin. He spends most of the films running time talking about his life long struggle with the drug and the insanity that it has brought to his life. The rest of the interviews are pretty much about Johnny Thunders, which makes sense because the footage was of course taken for a Thunders documentary. Dee Dee would die of a heroin overdose a year or two after these interviews and Lech Kowalski cashed in on the punk icons death by releasing the footage as a feature.

The thing that I find most interesting about this movie is that it really shows how strange Dee Dee is. I mean we all know hes weird but this movie places us in a room with him for just over an hour and he almost seems insane. First off he looks like Christopher Lloyd here, with a shaved head and his big ears. He spends much of the movie talking about his tattoos and scars but then he gets real weird and starts talking about haunted apartments and Satan and stuff like that. Its a weird movie about a weird guy. Probably not a very big fan base for this one. I would only recommend it to people who are really interested in Dee Dee Ramone. 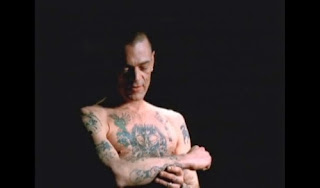