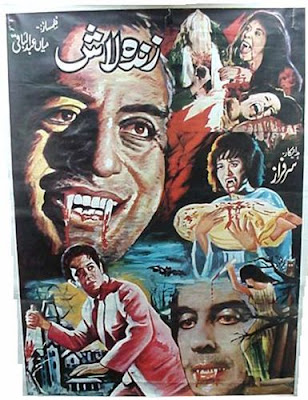 The Living Corpse also known as Dracula In Pakistan was the first of its kind to come from the highly religious and censored country of Pakistan. In fact there was only one previous horror film ever in the country. For this reason The Living Corpse serves to be one of the most rebellious and dangerous films ever made.

Unlike India which has a somewhat more relaxed censors code, Pakistan has never had a film which was restricted for adults until this adaption of Dracula. The censors board passed the film with an "adults only" certificate for the first time under one condition. The conditions was that the filmmakers would never again attempt to make a film with such a dark story. The Pakistani film industry was sure that The Living Corpse would be a miserable failure and pretty much go unseen. They were of course proven wrong when it was an instant success. The Living Corpse proved to be a big hit and the people of Pakistan flocked to the film in droves to see the first ever adults only film. 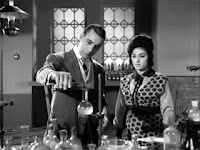 By western standards it is hard to understand how this movie would be restricted in any sense. The scenes where vampires dig their fangs into victims are almost entirely cut and of course there is no nudity or anything like that. The filmmakers were even forced to add religious texts to the beginning of the film so the viewers did not feel they were doing something blasphemous by going to see it. Being an atheist I can't help but feel sorry for such a blind and socially bound country. Since there are not vampires in Pakistani folk lore the story is a bit different. It almost seems to be a cross between Dracula and The Invisible Man. The film starts off with a sort of mad scientist who is working on the elixir of eternal life. Well the concoction turns out to have very different effects. Upon drinking the elixir our scientist drops dead. He is placed in a coffin in the basement of his mansion only to return as a blood thirsty vampire. From here it becomes a pretty standard retelling of Dracula and seems to be more influenced by Hammer Studios 1957 version The Horror Of Dracula.

In one of my favorite moments Dracula says to a guest at his mansion "Children of the night... The music they make would not appeal to a city dweller like you" of course being an odd twist on the famous "creatures of the night... what lovely music they make" line from the Bela Lugosi classic. This is just one of the many bizarre takes on the classic 1931 film. The Living Corpse also adds in the expected song and dance numbers that one would expect from a movie of this region. It also comes complete with a very creepy scene that I can't believe passed the censors board. When a female vampire tries to take Dracula's victim for herself. Dracula throws her what looks like a bloody baby wrapped in a sheet and says "Feast on this". This unexpected disturbing imagery  is not the only shock in the film. We also have a vampire melt down and knives plunged into chests of vampires. One thing I found interesting is that the violence towards women seems to be shown more on screen then the violence towards men. This again possibly shows the mentality of a backwards society. When it is all said and done The Living Corpse is a entertaining watch for Dracula fans. The lighting and camera work is exceptionally well done and it manages to keep a creepy gothic atmosphere.

This one was released on DVD with English subtitles from the cool dudes at Mondo Macabro. The DVD is worth a watch for anyone interested in South Asian horror.