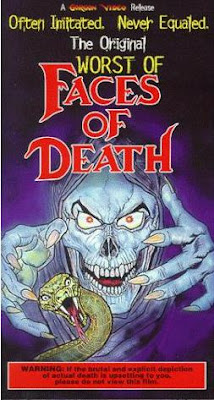 I recently picked up Faces Of Death 1-5 plus a documentary called Faces Of Death Fact Or Fiction and this title. I some what reluctantly have been forcing myself to watch em all in chronological order. This one might be the most pathetic of the lot.

The title claims it to be "The Worst" Of Faces Of Death and I just might agree for the fact that is nothing more then a composit of Faces Of Death 1, 2 and 3. They cut together what they felt is the most gruesome moments from the three films and offer up this compilation of blood, guts and gore.

As the viewer there is nothing like taking the easy way out of things. We should all have to endure the equal amount of torture by sitting through the full films. As a film maker this video is nothing more then another marketing and money making scheme. There is nothing more to say about this so called movie with the exception of the opening where we are told that Dr. Gross is now dead himself and that his experiments and studies are still being examined for future Faces Of Death movies.

For a better time check out Mondo Cane or Africa Addio. Or just stick with the original Faces Of Death. That one at least got a theatrical run, unlike this deserved straight to video shit. 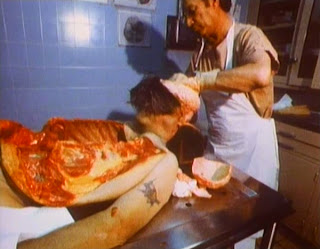 Email ThisBlogThis!Share to TwitterShare to FacebookShare to Pinterest
Labels: Compilations, Documentary, Mondo Films, The Worst Of Faces Of Death