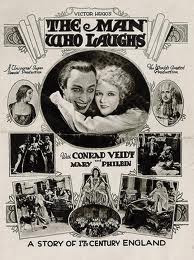 Many of the horror films from the silent era come off more as very dark dramas then horrific by today's standards. The Man Who Laughs is a perfect example of this. Like many of Lon Chaney's classics the films are classified as horror for the subject matter and disturbing makeup for the time.

I'm sure The Man Who Laughed disturbed movie goers in the late 20's but one can't help but be reminded of Batman villain The Joker. The straight razor smile and the pasty makeup is still being used today.

The main difference between The Joker and this silent film is that The Man Who Laughed is a good guy, Who has been wronged from childhood and still suffers from a cruel society through out his entire life. He is a clown in the circus but this poor mans act never stops. He is starred at wherever he goes and the general public feels no pity. Instead they point and laugh with out a care to how "the clown" feels.

The Man Who Laughs is the offspring of a traitor to King James II. The kings noblemen throw the traitor in an Iron Maiden where he of course meets his fate and then they take his young son to a surgeon who will slice open the kids face, permanently disfiguring him. Then the disfigured boy is left to die in the freezing cold. The boy stumbles upon a woman who has frozen to death. The woman is clutching on to a baby girl who is still alive somehow. How a baby would out live her mother I'm not really sure but what ever. The disfigured boy takes the infant with him and finds shelter in a traveling Carny's home. The carny is shocked to learn that the baby is blind due to the fact that it was left in the cold blizzard for so long. Then he sees the disfigured boys face and automatically sees dollar signs. The movie jumps forward in time and the two handicapped children are all grown up and are regulars in the carnival and the disfigured boy is becoming famous, recognized as The Man Who Laughs. 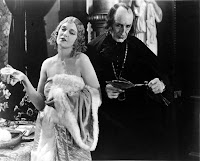 The Man Who Laughs and his blind girlfriend plan to be married but things get really bad for them when a beautiful blond played by Olga Baclanova shows up at a local carnival show. Most would probably remember Olga best as the devious bitch in Tod Browning's Freaks. Olga plays The Duchess, a member of the royal family and for her own greedy reasons decides that she is going to marry the laughing man. Of course this will all end in tragedy and I couldn't help but be reminded of Lon Chaney's Laugh Clown Laugh due to the tone and similar plot. I also couldn't help but think to myself how much better this film would have been if it were directed by Tod Browning and stared the great Lon Chaney. This is the perfect role for Chaney and of course he would have brought a lot more to it. 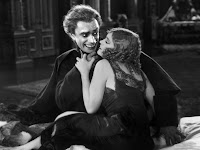 The truth is that The Man Who Laughs started to lose my interest after a while. The story was interesting enough and there is a big cast with lots of action but it all runs just a bit to long for its own good. Clocking in at 110 minutes which easily could have been cut down to a generous 90. The movie tends to get a bit repetitive after a while.

The main high note here is of course the face of the laughing man but some of the other fun and oddities that this one has to offer aside from the Iron Maiden scene is, a dog named Homo, a mass hanging that leaves limp, lynched bodies across the land. Miss Olga (Freaks) Baclanova gets fully naked for the camera in a bath scene and a man has his throat ripped out by a dog (Homo) in true Lucio Fulci fashion.

Worth a watch at least once for those who can dig silent film but it does take some concentration to stay awake during the slow parts.

Email ThisBlogThis!Share to TwitterShare to FacebookShare to Pinterest
Labels: Man Who Laughed, Silent