Most would probably remember Andrea Bianchi best as the sleazy director who did Burial Ground and Strip Nude For The Killer. Bianchi proves yet again that he is a master in the ways of Eurotrash with Malabimba, also known as The Malicious Whore.

Malabimba is pure exhibitionism disguised as an Exorcist ripoff. Sure we have a demon possessed teenage girl but the soul purpose of this movie is to show full fledged female nudity.

Its not long before Bimba is down in the basement and performing some oral sex on a bed ridden, crippled relative. She is caught with the meat in her mouth by Mariangela Giordano who I remember best as the hot mom who has her titty eaten by her zombie son in Burial Ground. This time around Mirangela plays a nun by the name of Sister Sofia and our sleazy version of The Exorcist makes its way into Nunsploitation territory.

Sister Sofia does her best to warn the family of Bimba's evil ways but its not long before the nun also falls victim to the sexual deviance of The Malicious Whore.

It is nice to see Mariangela Giordano yet again in the buff and we are treated to a steamy lesbian scene. Oh and did I mention that Bimba is supposed to be 15 years old? Well of course she doesn't look it. In fact she is a bit boyish and the least attractive out of the whole lot. Still the age thing makes Malabimba all the more twisted and bizarre. 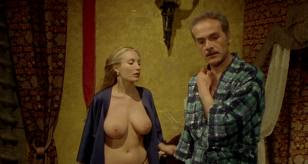