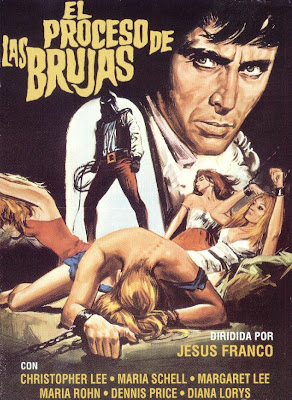 Jesus Franco digs back into British history and basis The Bloody Judge off of King James The II and his murderous followers in the Clergy. Christopher Lee, who most remember best for his Hammer Studio's work like Horror Of Dracula also has appeared in some nastier Foreign stuff like Mario Bava's The Whip And The Body. Lee plays The Bloody Judge in this trashy film and it is amongst the nastiest of Christopher Lee's body of work.

Christopher Lee himself claims he has never seen The Bloody Judge due to the fact that he is offended from what he has heard from critics upon the brutality and eroticism of the films nature. The truth is that The Bloody Judge is almost a bit tame as far as Franco goes. Sure there is torture, rape and full frontal nudity on display but the director has far surpassed The Bloody Judge in bad taste on previous films and features to come. For me The Bloody Judge plays like a less violent and over the top version of the cult classic Mark Of The Devil, which would be released in the same year. Which film came first I'm not exactly sure but it is safe to say that both of these burn-witch-burn movies cashed in on Vincent Price's Witchfinder General and took it in a more exploitative and ghastly direction.

And speaking of exploitation, The Bloody Judge went under the ridiculous title of Night Of The Blood Monster in America not to be mistaken for the awful Corman flick Night Of The Blood Beast. The American title is not only a misleading title but just a bad title in general. Jesus Franco and Christopher Lee alike were both disgusted by the American distribution and retitling of the movie and I can't say that I blame them much.

Even if I were lucky enough to catch this thing on 42nd street or in some shit-hole theater somewhere I would be expecting something more like a John Ashley movie like Brides Of Blood rather then a Franco telling of the Inquisition and witch burnings.

Well they don't call em exploitation movies for nothing and for those poor unfortunates who thought they were going to see an all out monster-fest... That's just another battle scar that comes with the territory for us life long devoted drive-in movie fans and cult film enthusiasts.

Another problem with The Bloody Judge is that it runs a bit to long. In its uncut form The Bloody Judge clocks in at 104 minutes and there just isn't enough bloodletting and nudity to fill that amount of space. Instead Franco stages a battle with real cannons, horses and old time wardrobe. In my opinion it all looked a bit amateurish and seemed more like a waste of time and money from a director that we are really just waiting for the next bare breasted whipping scene. None the less it is obvious that the director was given a decent amount of money to make the film and he really tried to take it in somewhat of a respectful direction. This of course being a bit annoying to us true demento's who are looking for the more familiar Franco form of art.

On a more positive note some of the more memorable moments are a Christopher Lee rape scene, hands are lobbed off with an axe in a scene that reminded me of Guru The Mad Monk which would also be released in 1970 and hold some what of a similar plot. Hot tar is poured on the back of a naked women in true Bloody Pit Of Horror fashion. Accused witches are of course burned alive, there are stabbings, hangings and a man has his body chopped up with an axe. Of course we get some naked females and as an added bonus we have a creepy executioner running around in a spandex outfit. As I mentioned before due to the run time these scenes are bit to spaced out and I feel it really harmed the film.

The Bloody Judge is still worth a watch for all Franco fans or for anyone who wants to see Christopher Lee act his hart out in a more trashy role but still I would recommend Mark Of The Devil for a better and more grotesque time with evil fascists and witches.