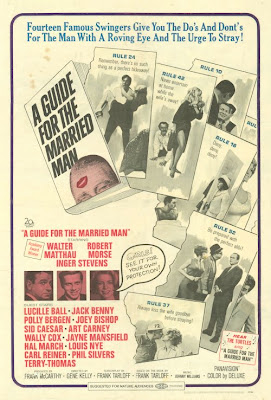 This is a pretty daring comedy for 1967 and its so strange to think that this sort of thing would be rated {PG}. What we have here is basically the handbook for cheating on your wife. It explains all the ins and outs and the precautions one most take to avoid being caught. 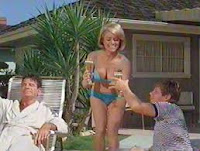 It also makes for great eye candy for all men. The boobs bounce and the hips shake as the 60's scantily clad babes flaunt for the cameras.

I can see this movie getting a lot of men in trouble back upon its release. Especially if that man's best girl has any kind of doubt to what he has been doing. Perhaps he hasn't been working late.

A Guide For The Married Man shows men as they are. Lustful idiots who usually think with the wrong head. Of course the movie also portrays women in a rather dim light but hey it was the times.
Walter Matthau plays Paul, a happily married man who just can't seem to keep his eyes off of the ladies and I can't exactly blame him because he is surrounded by hot babes where ever he goes. His wife Ruth is the perfect house wife and there is nobody in the world Paul would rather be with. That is with the exception for any women at the moment. Paul's best friend is a professional cheater and is trying to teach Paul how to have a respectable affair. 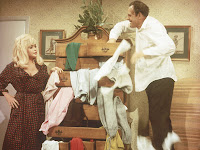 Jayne Mansfield shows up for a roll in the hay with a married man. What can be better then a one night stand with Jayne Mansfield? Well she looses her bra in the married mans home and it is only a matter of time before that thing shows up. Of course it is nice to watch Jayne shake her ta-ta's for the camera and I think just about every guy can relate with this scene. How many times has a girl left something behind in your bedroom?

That's what makes A Guide For The Married Man so great. It has so many realistic moments in it and it still manages to be funny and sexy at the same time.

This one is for the guys. Just tell your best girl that you're working late. 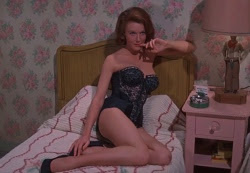 Email ThisBlogThis!Share to TwitterShare to FacebookShare to Pinterest
Labels: A Guide For The Married Man