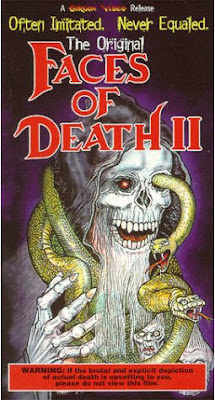 Faces Of Death part 2 is just further proof that true Mondo Films are dead. Three years after the release of the first film this sequel follows up in a pretty stong way.

This time around there is much less fake stuff. The truth is that its a pretty rough sit. I personally sink into a bit of depression when ever I watch these movies and I really can't say why I do it to myself. I guess a part of me almost feels obligated to see how they went about it and how true it can stay to the traditional style of mondo cinema.

I suppose the first couple of Faces Of Death movies have slight more class then the average straight to video shenanigans. They at least try to be a documentary and can even be some what informative at times. Still when it is all said and done it is a pretty grim look at humanity and the evil that man is capable of. We are haunted by images of a live execution which would be used in many other straight to video pseudo mondo flicks including World Of Death but for me the more grisly stuff is the atrocities of war. Victims of bombs, napalm and radiation is quite revolting and they don't exclude children from the wrath of the cameras eye. In fact it seems they dwell more on the innocent children who lost their lives during war. 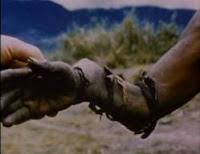 Some other moments that stand out is a woman who was hit in the head with an axe when she got a bit lippy with her husband. A violent shoot out with the police the results in one dead hostage, a man bleeding in the street with a bullet in his guts and another man shot and killed on site. We get a boxing match that ended fatally and a bunch of stunt men who lost their lives to their own brand of art.

This time they spare us the monkey brains but they do show us what happens when monkeys are injected with hard drugs. They also show a dolphin massacre in Japan, Whale hunters, Seal clubbers and plenty of other dead animals. It takes a special kind of person to sit through these movies. It takes another kind of person to enjoy them. Those might be the kind of people I do not want to meet. Still movies like Faces Of Death serves a place in society and I personally believe they shouldn't be ignored. I might not go as far as to agree with writer/director when he says "They should be embraced" but still they are here and are depictions of factual mayhem. For that reason alone they serve some importance. So get a barf bag and squirm your way through this nasty follow up to the cult classic Faces Of Death. 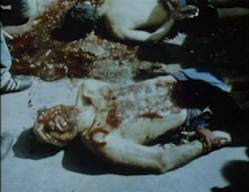