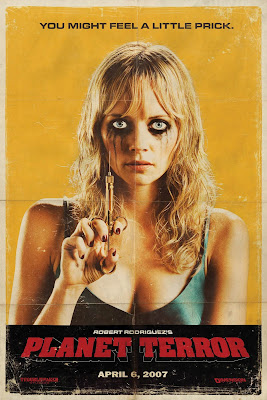 Due to box office failure the films were distributed separately on dvd and unfortunately a lot of the fun stuff was left out.

Robert Rodriguez feature is an all out zombie flick called Planet Terror which stars the incredibly sexy Rose McGowen as a Go-Go dancer who has her leg amputated after a zombie attack. She teams up with a bunch of weirdo's and battles the flesh eating ghouls all the way to Mexico.

Planet Terror was never intended to be taken seriously. It is an all out gore-fest from beginning to end with gut munching, head explosions, car explosions and plenty of cheesy dialogue. This tongue in cheek homage to 70's and 80's exploitation films is nothing new for the director. All of his films pretty much play the same way and this is amongst the directors best.

Big budget, modern, Hollywood horror is the last thing that I usually would praise but these homage films from the 2000's serve a place in my collection. Of course Grindhouse jump started it all but the films to come after would surpass it in my humble opinion. Machete is good clean Mexploitaion fun and my personal favorite being Black Dynamite. I show respect where it is due and if it wasn't for two fan-boys like Quentin and Robert there might not have been a Black Dynamite.

If you want to see Tom Savini ripped to shreds or a little kid blow his own brains out or a woman snap her own wrist or Rose McGowan have a gun implanted where her leg used to be or Bruce Willis mutate and melt down or a mad scientist collect human testicles or zombies being yet again decapitated by helicopter propellers, then you should check out Planet Terror. Or you could always just watch all the movies that it pays homage to. Either way this is the closest we get to exploitation in America in the 2000's.