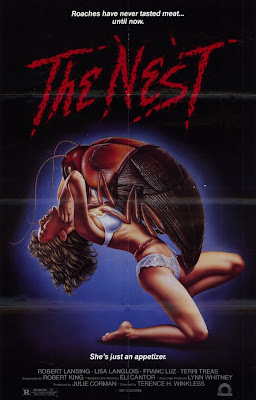 I usually love all of these silly nature gone wrong and animals attack flicks but The Nest really is nothing more then a big let down. Its the generic tale of secret government testing gone wrong but this time we are left with mutating cockroaches.

How you can fuck up a movie about flesh eating cockroaches, I'm really not sure but some how they managed well enough on this one.

A small town named North Port gets more then they bargained for when they are over run by killer roaches. The little critters sneak up on dogs, cats and humans alike and rip the flesh from the bone leaving a bloody mess where ever they go. I have to admit the gore effects are pretty good but in my opinion the film relies to much on special effects and not enough on character development or even a coherent plot which is the major downfall of the final product. Being somewhat of a gore-hound myself I enjoy the scenes of eyeballs being eaten from the victims skulls but then the movie goes into this cheesy 80's realm and destroys itself with shitty humanoid cockroach mutations and transformations.

I think I would just rather watch the Creepshow segment with the killer cockroaches. That one is good clean gory fun and holds back on mutant cat-roaches. We have way to much of this stupid shit. One scene in particular really annoyed me when a man sheds his skin to reveal that he is a giant cockroach that walks up right.

The towns people might be a bit confused because it is not The Blob that is terrorizing them but they still reach for the nearest fire extinguisher and get a bit trigger happy. I guess fire extinguishers is the weapon of choice against any form of monstrous invasion because yet again it seems to do the trick.

The Nest also comes in tact with a boring love story for a sub plot but for me the best scene shows a man playing in a dumpster as a waitress yells to him "Stop playing with the garbage". This dirty fucker meets his fate by the jaws of the killer bugs and is left dead and rotting amongst his beloved trash.

Trash is what we have here and not in a good way either. Stick with the countless other animals gone wrong flicks. This one would only really appeal to those who love dumb 80's movies where gore is king and story telling is secondary. 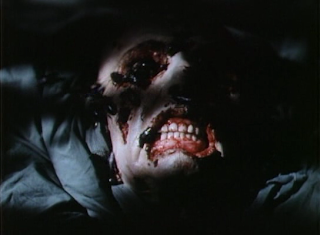