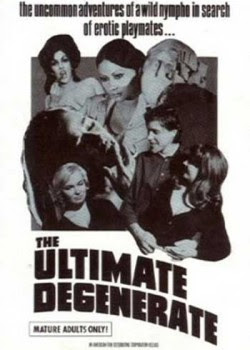 Oh yes the Findlay's have done it again. For those unfamiliar with Michael and Roberta Findlay's body of work in trash cinema. The married couple has released some of the filthiest roughie, sexploitation films known to man.

Amongst the most offensive of Findlay movies is the Flesh trilogy. Kiss Of Her Flesh, Curse Of Her Flesh and Touch Of Her Flesh stars Michael Findlay himself as a sex crazed psychopath with a fetish for torturing and killing sexy young women.

The Ultimate Degenerate is equally depraved. Again Michael Findlay plays the leading degenerate but this time instead of being blind in one eye he is wheelchair bound. The cripple sicko goes by the name of Spencer and Spencer has an underground S&M ring where women are payed handsomely to satisfy Spencer's every need. Lets just say Spencer is into some sick and twisted shit.

The latest addition to Spencer's underground sewer of pleasure is an exhibitionist named Maria. Maria is "sick of New York City and the human garbage that litters the streets" For some cash and kicks she meets up with Spencer's partner Bruno and joins the ring of smut.

Maria is a bit of a nympho already and upon her arrival she is shot up with Spencer's special aphrodisiac drug and becomes more horny then ever. She indulges in lesbian acts which is nothing new to her considering the film opens up with Maria rolling around naked with her heavy breasted roommate. Maria also lays naked on the diner table while Spencer enjoys a meal. She lay with her feet facing Spencer. "I think the smell of feet excites him" but its not long before Maria feels degraded as she is gratuitously sprayed down with whipped cream. Whipped Cream is just one of Spencer's many fetishes and luckily for Maria it is one of the less violent ones.

It all comes to a climax in a trippy, nightmarish art scene with naked babes, more whipped cream, human skulls and murder. The Ultimate Degenerate offers up gas mask villains, hot fire poker torture and plenty of big 60's underwear to hold the attention of the average demented degenerate.

I hold this depraved filth very close to my heart and would like to thank the late Michael Findlay for having a sick enough mind to think this stuff up. The Ultimate Degenerate goes perfect with a side of corn. Sick! Sick! Sick!