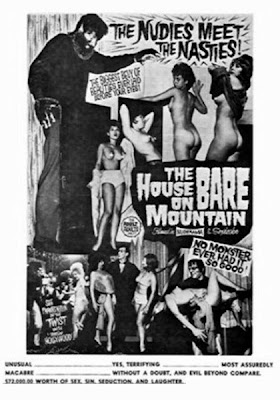 House On Bare Mountain is one of the weirdest nudie cutie's of all time. Directed by exploitation pioneer Lee Frost also known as R.L. Frost who is known for greats such as Defilers, The Black Gestapo and The Thing With Two heads and also for his awful excursions as well such as Zero In And Scream and Ride Hard Ride Wild. 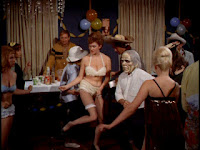 House On Bare Mountain is amongst the earliest of Lee Frost films and is definitely worth a watch for anybody who is into 60's nudie cutie films. Its as strange as they come.

House On Bare Mountain plays more like a nudist camp film with monsters thrown into the mix. Monsters such as Frankenstein, Dracula and The Wolf Man. Of course these monsters are made up in really cheap looking masks and awful makeup. In fact the man who did the makeup for the Wolf Man character was responsible for the make up on Plan 9 From Outer Space. So that should give you a little idea on the production value that we are looking at here. 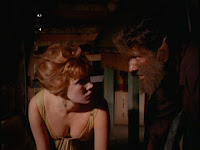 Still House On Bare Mountain is good filthy fun and an example of bizarre 60's sexploitation at its finest. It all takes place in a school for girls called G.G.S.F.G.G. which stands for Granny Good's School For Good Girls. Granny Good is played by exploitation veteran Bob Cresse in drag. Granny Good has it made. She sits around all day drinking and watching her good girls take showers, go sunbathing, jump rope in the nude etc. Actually the good girls in Granny Goods school never really wear much clothes. Since House On Bare Mountain is an earlier example of the nudie cutie coming in while the nudist camp films were still being shit out by the dozens, we are treated to plenty of tits and ass but the pubic region is a no-no. The girls do a pretty damn good job here covering up their genitals but that is about all they can do well. The acting on the other hand is pretty terrible but lets face it, you're not watching House On Bare Mountain in search of an over looked academy award winner. 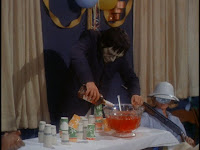 Nope, you pretty much get exactly what you came for and that is plenty of T&A, giant 60's underwear that is big enough to choke a horse, crazy go-go dancing, cheesy monsters and a really dumb plot. This movie also has one of the greatest exploitation movie trailers in the history of trash cinema. If you can't bring yourself to sit down and watch this brand of smut then at least check out the trailer. It proudly states "If you don't like horror movies or sex... Or comedies or sex... Or adventure or sex... Or Frankenstein or sex... Or the Wolf Man or sex... Or Dracula or sex... Or the Mummy or sex... Then don't come see this movie honey. Because this movie is dirty. Dirty! Dirty! Dirty! Its even Filthy!" The trailer really has to be seen to be fully appreciated. Oh and did I mention that this movie is dirty?