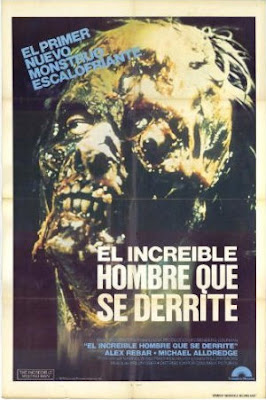 People love to hate this movie but the truth is that The Incredible Melting Man is incredible from start to finish in all of its gory glory.

This one almost plays like a remake of the 1950's classic monster flick The Hideous Sun Demon which is also amazing. However this 70's ripoff follows an astronaut named Steve who returns from a voyage to Saturn!?!? with a bit of a problem. He was exposed to an unknown source that causes him to become a violent, murderous madman on a blood-crazed path to destruction. Oh and there is one more thing... He is melting. Melting fast for that matter and it seems the only gratification that Steve will get from here on is to tear people apart and eat them. Yep this movie has it all! Melting astronauts and cannibals. What more do you need?

Naturally most people despise this movie for its bad acting, low budget and constant plot holes. For me this just adds to the madness of this 70's gore epic. It sports a beautiful moment where The Incredible Melting Man decapitates a fishermen and throws the severed head into the river. The scene cuts away to some very young kids smoking cigarettes and eventually cuts back to the head floating down the river and dropping from a waterfall where it will eventually come crashing down onto some rocks. The head bursts open on impact with red splatter sent flying towards the camera. Beautiful!

There are a bunch of genuinely dumb moments including one that shows a fat nurse on the run from the melting man. She runs clean through a glass door rather then opening it and of course she becomes a pretty healthy meal for our cannibalistic villain.

However the weirdest entity within this movie is that it tries to play like a 50's sci-fi monster movie. It is clear that this is where the film makers inspiration came from and there are so many 50's horror cliches thrown into the mix including the constant use of a giger counter.

Even if they are paying homage to the 50's it just never comes off right because The Incredible Melting Man is just so 70's in its sleaze factor. Despite the over the top gore, the film also offers up some tit in an overly trashy scene with actress Cheryl Smith who shows up in equally trashy delights such as Caged Heat, Pom Pom Girls and Massacre At Central High. This time around miss Smith plays a model who has her top ripped off by her scummy photographer who just really wants to see some tits. I wish I could have had a talk with this pervert and told him to just rent some of her other movies and he would have seen all he wanted but thanks to him we get some more bare boobage in a much appreciated scene.

The movie also offers up a senior citizen couple being devoured, eyeballs fall from the sockets, strangulation, severed arms, electrocution, a shoot out and all the melty action you deserve. Watch it! Embrace it! Love it! Its from the incredible 70's man!