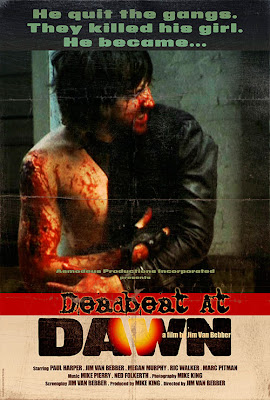 Deadbeat At Dawn is not exactly a horror movie but it might as well be because it is loaded to the brim with blood and gore. This late 80's splatter film follows an ex gang leader named Goose through a path of sex, drugs, crime, murder and revenge.

Deadbeat At Dawn would be the first feature film from young director, actor, stuntman etc. Jim Van Bebber. He would go on to do The Manson Family and a bunch of other morbid short films but Deadbeat At Dawn is my personal favorite of the lot.

To think a man in his mid twenties could deliver such a violent and nihilistic delight such as Deadbeat At Dawn without a major studio backing him is amazing.

The movie is so brutally violent and the stunts are outrageous. I'm sure many people got hurt filming this piece of mayhem. Jim Van Bebber himself acts out the craziest of stunts. Hanging from moving vehicles and being smashed into city buildings. I really wouldn't be surprised if he left this thing with a few broken bones or at least some stitches or something. 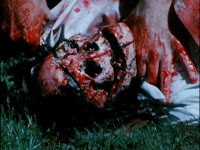 Jim Van Bebber plays Goose, the leader of a teenage street gang called The Ravens. The Ravens are perpetually at war with rival gang The Spyders. In the earlier moments of the film we are treated to a gang war in a cemetery which ends in a total blood bath. One guy gets his hand blown off in true Taxi Driver fashion and the leader of The Spyders gets cut up pretty bad by Goose. Goose is wounded pretty bad himself in the knife fight and we witness in great gory detail faces being slashed open, torso's being shanked and a really nasty slice to the palm of the hand which will be sewn up by hand in a bloody bathtub in the next scene and this is just a taste of things to come in the gore department. Deadbeat At Dawn is truly a gore-hounds delight. 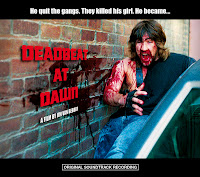 Goose's girl Christy is getting tired of the gangs and fears that she will find her man dead in a filthy alley way one of these days. She convinces him to quit gang life. Goose tries his best at the nice life. He steals himself a motorcycle and takes Christy on a road trip. When they come back to their shit-hole home town, Goose goes to work selling dope on the streets. Rival gang members decide to get back at Goose by killing Christy but they are not content with just shooting her. Instead they send The Spyders most sadistic gang member Bone Crusher to break every bone in her body with a golf club. Then he rips her intestines out of her stomach. Later Bone Crusher explains that "Her intestines looked like little snakes coming out of her stomach". Bone Crusher is a total nihilist as is almost everybody in this movie and in one of his best scenes he explains "I just hate people and I don't care".

To continue the theme of nihilistic juvenile delinquents, when Goose finds his girlfriends mangled corpse he gives her a proper burial in a garbage compacter. He contemptemplates suicide but opts to join back up with the gangs instead. They rob an armored car and Goose takes off with the loot. It all comes together with an over the top bloody climax. Throats are ripped out (literally), brains are pulled from skulls, one guy catches a throwing star in the achy-breaky skull, another gets shot in the neck, fingers are bitten off and heads are severed.

There is no happy ending to speak of here but it sure will but a smile on the average demto's face. A must see for anyone who likes extreme independent cinema. 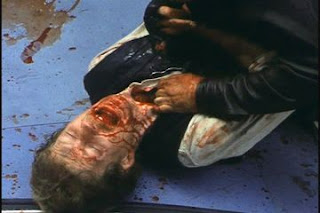